Dundalk endured a miserable night at Bishopsgate on Saturday evening as Aaron O’Driscoll secured nine-man Longford Town their first league win since March – and their first over the Lilywhites since 2008.⁣

After creating a number of good chances in the opening 20 minutes, Dundalk were hit with a sucker punch just seconds before the interval when O’Driscoll’s header squirmed under the body of Cameron Yates to give Daire Doyle’s men something to hang onto.

The Midlanders finished the game with nine men after Aaron Robinson and Rob Manley were both dismissed by referee Derek Tomney but even though Andy Boyle saw a curling effort come back off the inside of the post, Dundalk, who also had substitute Han Jeongwoo sent off before the final whistle, just couldn’t muster an equaliser and the natives held on to end a run of 25 league games without a win. 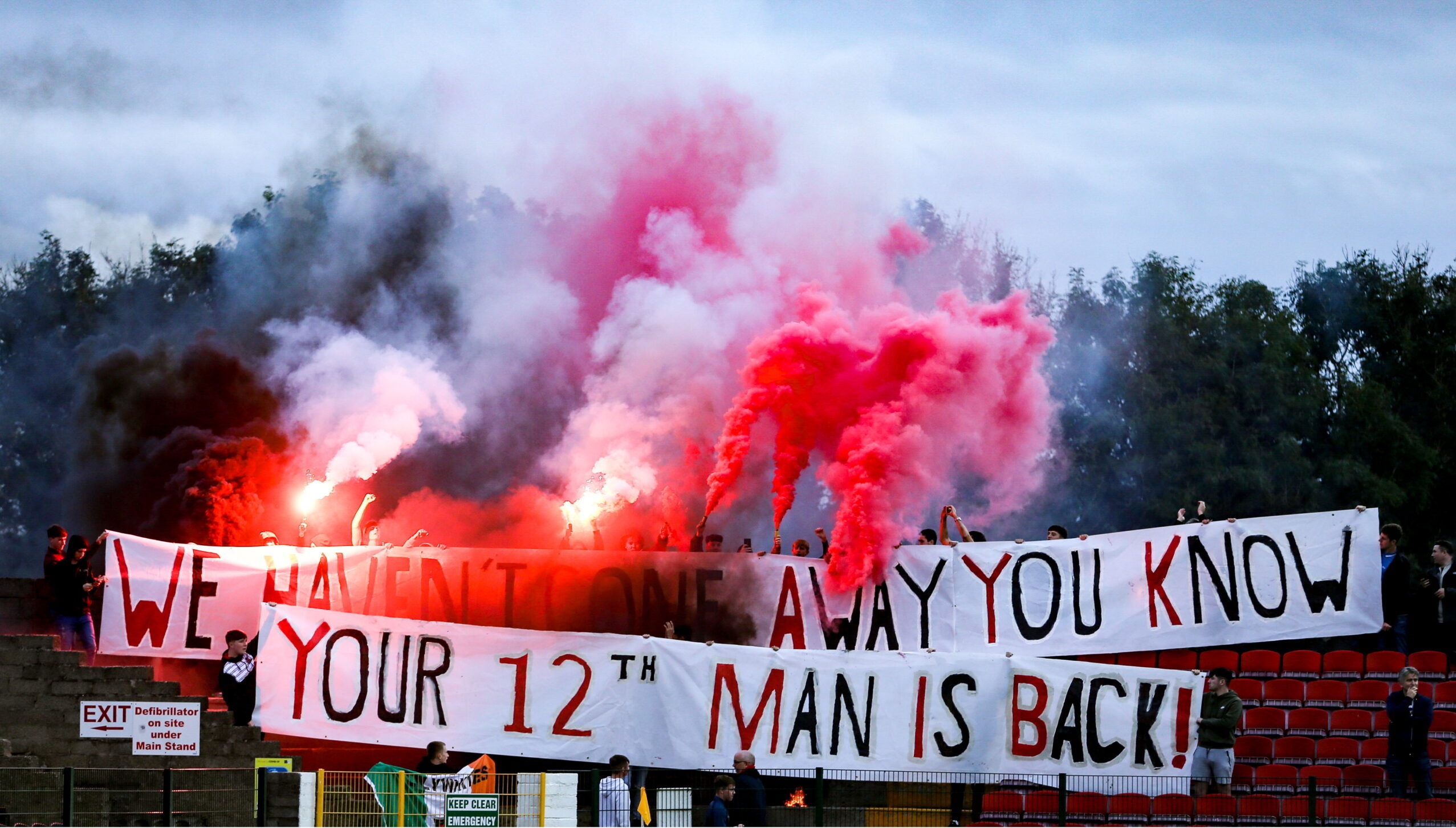 Vinny Perth made three changes to the side that drew 1-1 with Waterford eight nights earlier. Yates was handed his league debut for the club while Sonni Nattestad and Raivis Jurkovskis were both named in the team after returning from international duty but Daniel Kelly and Sean Murray were the latest names to join an ever-growing casualty list.

Yates was given an early touch when he gathered Daragh Nugent’s tame 20-yard effort inside the opening two minutes and Dundalk, backed by a colourful away support, soon found their rhythm with three good openings arriving in quick succession.

Patrick Hoban was involved in two, heading a Will Patching free over the top before cutting in from the left and beating three Longford players only to scuff his effort into Lee Steacy’s hands. Sandwiched in between was the best opening of the three when Jurkovskis broke free on the right and picked out the unmarked Sam Stanton at the far post but he hooked his effort over the bar from a great position.

Longford weathered the storm and Yates had to watch a Darragh Nugent shot clear his right-hand post after Cameron Dummigan was robbed by the midfielder just outside the Dundalk penalty area. Nugent popped up with a vitally important block at the other end to deny Greg Sloggett the opener and Steacy made an incredible point-blank save to deny Hoban after the striker did brilliantly to control the ball and set himself up for the strike. How crucial that turned out to be.

Dundalk were left to rue the missed opportunities when the hosts pulled ahead, right on the stroke of half-time. Dylan Grimes’ free from the left was flicked on by O’Driscoll and it had enough pace to creep under Yates and send the hosts in with an unlikely lead at the break. 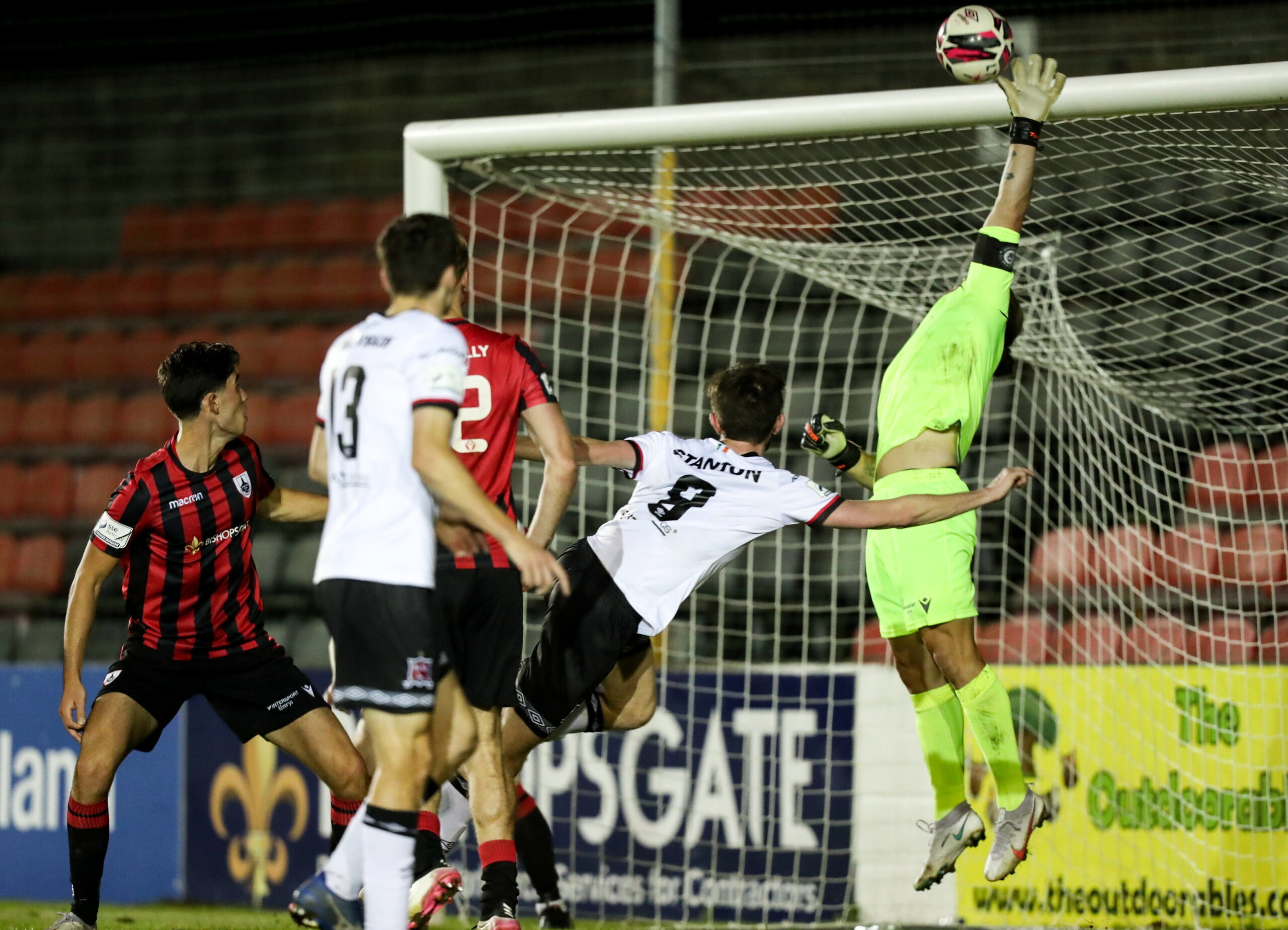 Perth made a change at the interval, introducing Mark Hanratty for Nattestad, and after Daniel Cleary went close with a header from a Patching free-kick, Dundalk were handed a route back into the game when Longford were reduced to 10 men just short of the hour mark.

Robinson, who was booked seven minutes earlier, was dismissed for a second bookable offence when his high foot caught Patching on the halfway line. From the subsequent free-kick, Boyle’s shot came back off the inside of the post and fell kindly into Steacy’s grateful arms.

Michael Duffy was summoned from the bench to replace Dummigan but Dundalk’s frustration started to show when the Lilywhites winger was booked for a foul on Aodh Dervin just three minutes after his introduction. Ryan O’Kane was also thrown into the fray as Dundalk penned the home side in for the final 20 minutes and Longford also lost Manley to a straight red card for hacking the teenager down as he attempted to break.

Referee Tomney played five additional minutes and Dundalk almost snatched a point when Stanton powered a header towards goal but Steacy did well to turn it onto his crossbar and over the top and Han’s dismissal for a tackle on Manley in the dying seconds brought the curtain down on a bad night at Bishopsgate that leaves Dundalk languishing second from bottom in the table. 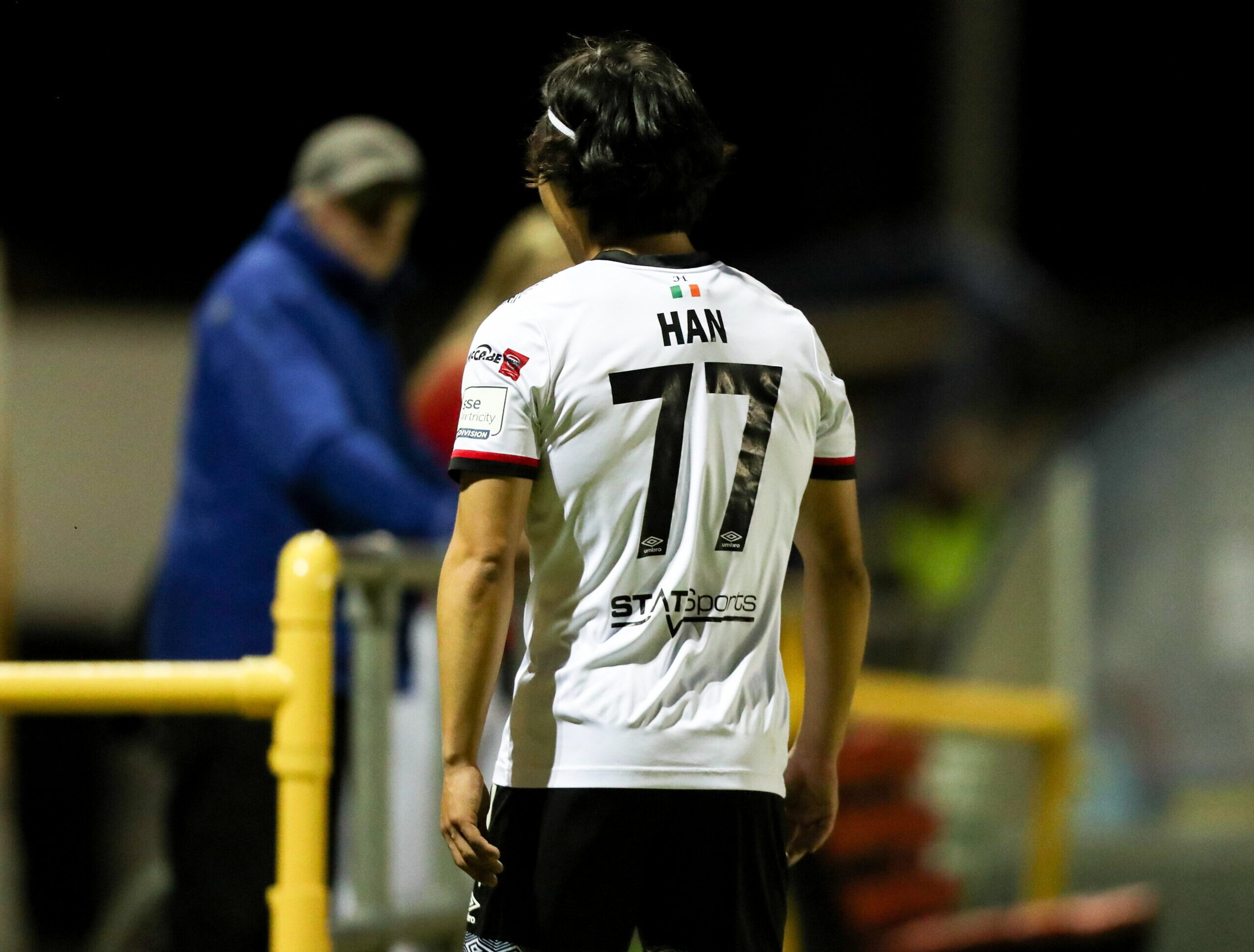 Han Jeongwoo leaves the field after been sent off during the SSE Airtricity League Premier Division match with Longford Town. Photo by Michael P Ryan/Sportsfile