Dundalk and Vitesse Arnhem played out a thrilling draw on Thursday night in the UEFA Europa Conference League third qualifying round first leg at the GelreDome.

In what was a scintillating game, Matuk Bero gave Vitesse a half-time lead however a stunning double from Patrick McEleney turned it in Dundalk’s favour and put the Lilywhites in front. Lois Openda levelled in the final stages for the Dutch side and he was later sent off as they finished with ten men.

It was a frantic opening to the game with both sides trying to get control of possession.

Vitesse were first to threaten the goal when Riecheldy Bazoer strode forward through midfield but his effort was inches over the crossbar with Abibi stranded. 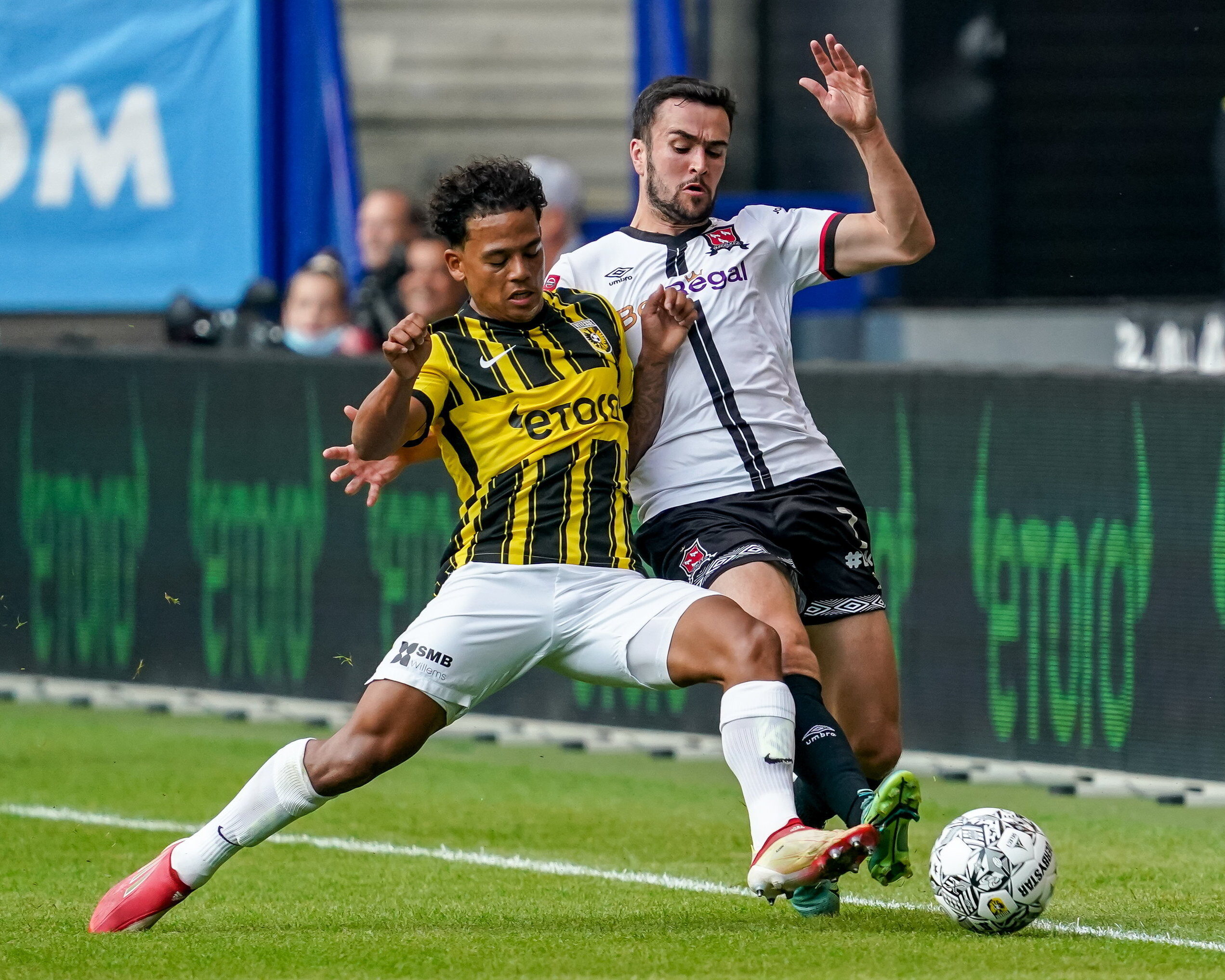 Max Wittek almost scored directly from a corner but Alessio Abibi did well to claw the ball away from under his own crossbar.

The Lilywhites grew into the match after that with  Daniel Kelly’s cross turn shot causing problems for Schubert but his defence bailed him out with the clearance.

Vitesse did begin to control possession once more and almost took the lead when Abibi was forced into action once again as he saved from Yann Gboho with the follow up blocked by Andy Boyle after Matus Bero shot goalwards.

Vitesse would take the lead 20 minutes in when they broke quickly from a Dundalk corner. Million Manhoef played in Bero and he clinically finished past Abibi who had no chance.

Patrick McEleney almost responded in stunning fashion immediately but his effort from 35 yards clipped the crossbar and went wide. 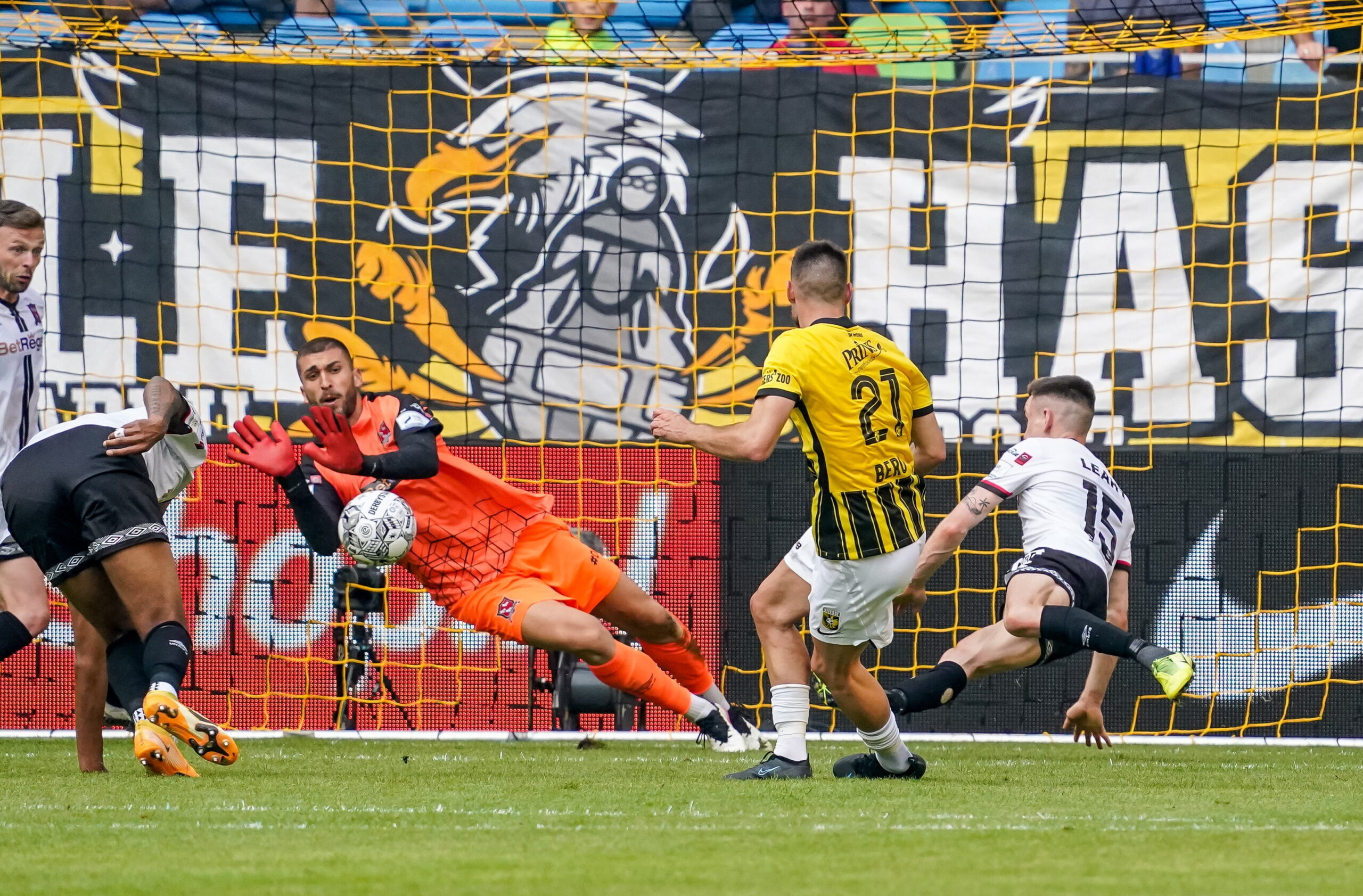 Fredereriksen had two quick fire efforts blocked before Gboho tried his luck once more however his went just wide.

Manhoef sliced a shot wide from the edge of the area while the same man headed into his own man at the back post as they looked to add to their lead.

It should have been 2-0 when David McMillan got caught in possession by Trondstad and he played a clever quick ball to Openda however he dragged his shot wide just inside the box.

Abibi pulled off a good save to keep it at 1-0 when Frederiksen got in behind, one-on-one but he was denied by the goalkeeper.

Bero once again looked like he had scored however Abibi did exceptionally well to palm the ball away as we approached half-time.

The second half began in similar fashion to the first with Vitesse on top. 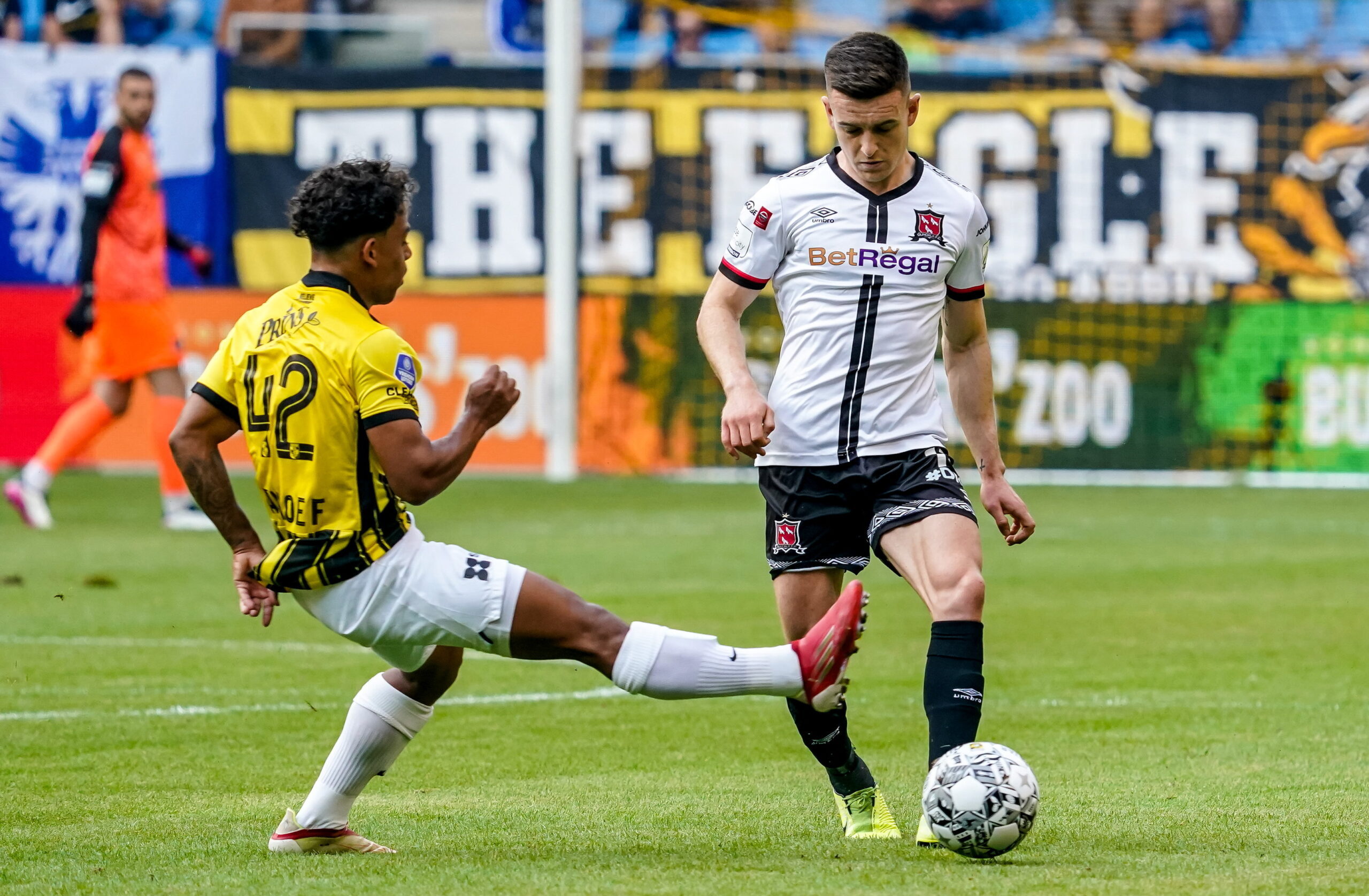 Hajek had a header tipped around the post by Abibi while the goalkeeper could do nothing only watch the ball strike the post as Bazoer again strode forward and shot from 30 yards.

Wittek was causing issues all night with his deliveries and he found the head of Doekhi who was free in the six yard box but he blazed over the bar.

McEleney gave the visitors a reprieve and jinked through the defence, his shot broke to Sloggett but his effort was tame and it was straight at Schubert.

It would be that man McEleney though who would strike for Dundalk.

Raivis Jurkovskis played the most superb ball into the area where McEleney rose brilliantly at the back post and guided his header past the reach of Schubert.

That stunned the GelreDome into silence with the hosts losing composure on the ball.

Substitute Oussama Tannane fired well over the bar from a free-kick after a foul by Sam Stanton.

The GelreDome would be stunned once more by that man McEleney.

Patrick Hoban played a clever ball in behind to find the on rushing McEleney and he took the ball in his stride and looked like he might have took too heavy a touch however he recovered and played the most outrageous chip that you will ever see to beat the goalkeeper.

Vitesse responded and forced Abibi into another good save as Openda shot but the goalkeeper saved down to his left.

Vitesse would recover and draw level when Openda had all the time in the world to attempt an overhead kick and score from close range.

Openda though would get himself sent off in the 90th minute after a coming together with Sam Stanton which rules him out of next week’s return leg.

That was the final action of note as the Lilywhites take a 2-2 draw back to Tallaght next week with it all to play for in the second leg.