While this evening’s meeting represents the 166th time that Dundalk and Drogheda United have locked horns, the first-ever meeting between the clubs took place 58 years ago this week.

The date was Sunday, August 16th, 1963, the venue, Oriel Park, as reigning league champions Dundalk, who were bound for the European Cup, played host to league newcomers, Drogheda (the United came nine years later), in the first round of the Dublin City Cup.

Played just five days after Dundalk beat FAI Cup holders Shelbourne 4-3 to win the President’s Cup at Dalymount Park, the excitement around the fixture was reflected by a crowd of 4,000, which, at the time, was a record attendance for Dundalk’s opening game of the season.

It brought in gate receipts of €420, helped no doubt by the later than usual 7pm kickoff which was fixed to avoid a clash with other sporting fixtures that day and the seven busloads and scores of cars that made the journey north from Boyneside to witness their club’s maiden outing. 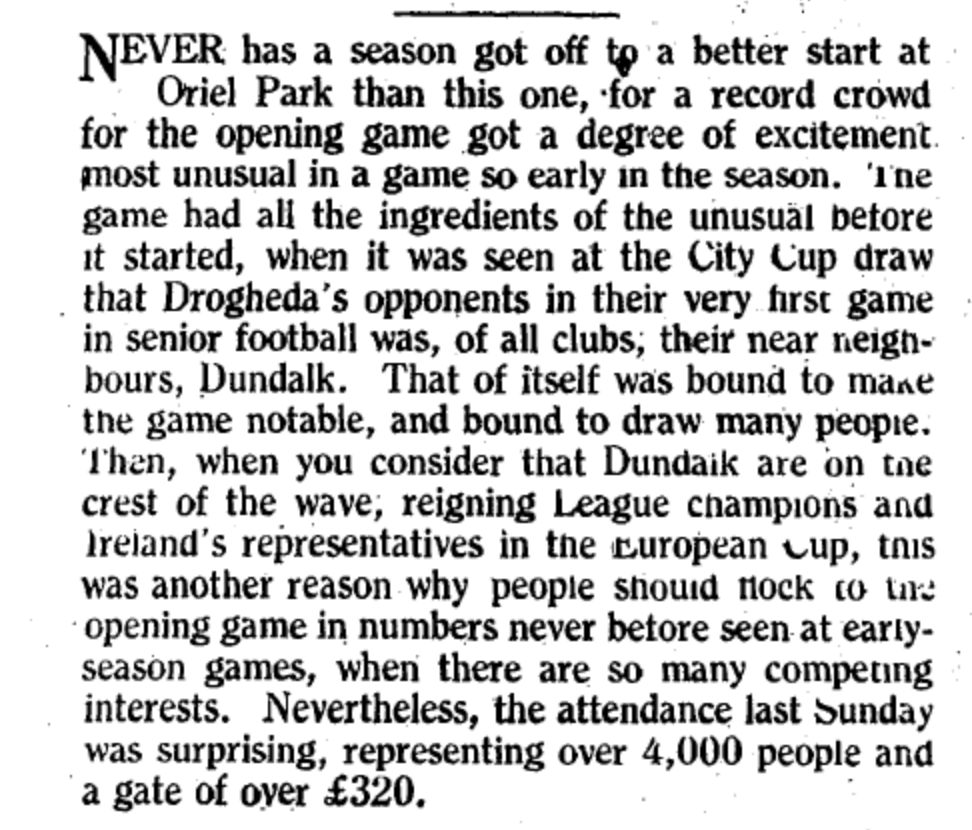 Fielding a team that contained four newcomers to the League of Ireland, Drogheda weren’t expected to put up much of a fight against a Dundalk side that included stellar names such as John Murphy, Patsy ‘Tootsie’ McKeown, Francie Callan, Dermot Cross and the great Jimmy Hasty but they pushed their illustrious neighbours all the way, only succumbing to a late goal.

In its match report, the Dundalk Democrat summed up the visitors’ gutsy display in this passage of writing: ‘The most that could have been hoped for was that they (Drogheda) would give a good show. As it turned out, not only did they give a better show than might have been expected, but they almost brought off what would have been a sensational win.’

With Timmy Lyons injured, Tommy Dunne was drafted into the Lilywhites defence but he was helpless to prevent the Drogs from taking a shock lead after just 15 minutes. Mick McElroy collected a cross from Joe Watters before sidestepping Tommy Dunne and shooting past Christy Barron to register Drogheda’s first-ever goal in senior football.

Francie Callan equalised for Dundalk from the penalty spot 10 minutes later after Paddy Kearns was penalised for handball and Hasty put the home side in front two minutes before the interval when he headed a Stan Pownell cross past Sam O’Brien. Despite that, the one-armed wonder failed to impress the Democrat’s reporter who noted that ‘Hasty did good things, but continues to annoy me with his flicks and fancy moves that don’t always come off.’

The majority of those in attendance thought that Dundalk would ease through the second half but they were stunned again as the Drogs scored two quickfire goals to retake the lead! McElroy nipped past Dunne to toe-poke the equaliser past Barron in the 47th minute and when former Dundalk player Tommy Kerr beat Barron with a powerful drive just two minutes later, the Boynesiders were in front for the second time.

Dundalk upped the ante and Billy Kennedy cracked the Drogheda crossbar before Cross set up Stan Pownell and he hammered the ball into the roof of the net to level the scores at 3-3 with 67 minutes on the clock.

In the event of a draw after 90 minutes, the game was due to be settled on corners with the team that amassed the most being declared winners. Locked at three goals apiece, and trailing 6-5 on corners, Dundalk knew they needed some inspiration as the game entered the final moments.

The magic moment came with 87 minutes played when Kennedy set Cross in and, according to the Democrat, he ‘siddled through the defence in his wraith-like fashion to bundle the ball past Sean O’Brien’ and settle the very first Louth Derby in some style!