Luke Mulligan is hoping to continue his development and take strides towards the first-team at Oriel Park after making his Republic of Ireland debut recently.

The Monaghan-born defender, who is a regular with Dundalk’s U14 academy side, received his first call up for the Boys In Green’s U15 squad recently, playing in both games of the double-header friendly against Montenegro in Podgorica.

Mulligan also had the opportunity to captain his country in the first of the matches where goals from Cork City’s Cathal O’Sullivan and Shamrock Rovers’ Darragh Marshall gave Jason Donohue’s men a 2-0 win.

A goal by Vuk Vlahovic was enough to give Montenegro a 1-0 win in the return game and, speaking to dundalkfc.com earlier this week, Mulligan, understandably, was all smiles as he discussed his first trip with the national team.

“It was a good challenge and a brilliant experience. I really enjoyed it,” he said. “It was a big change from club football and a bit awkward at first because the players don’t really know each other, but everyone was very friendly so it was fairly easy for us to gel as a group.”

Mulligan also gave credit to his teammates at Dundalk, who he credits with helping him to elevate his game this year.

“The lockdown at the start of the year helped me because I had the time to just improve on the basics and then this season you can see all of the boys have improved a lot. We’re all getting along better which helps and then winning on the pitch has helped us build our confidence and make us better.” 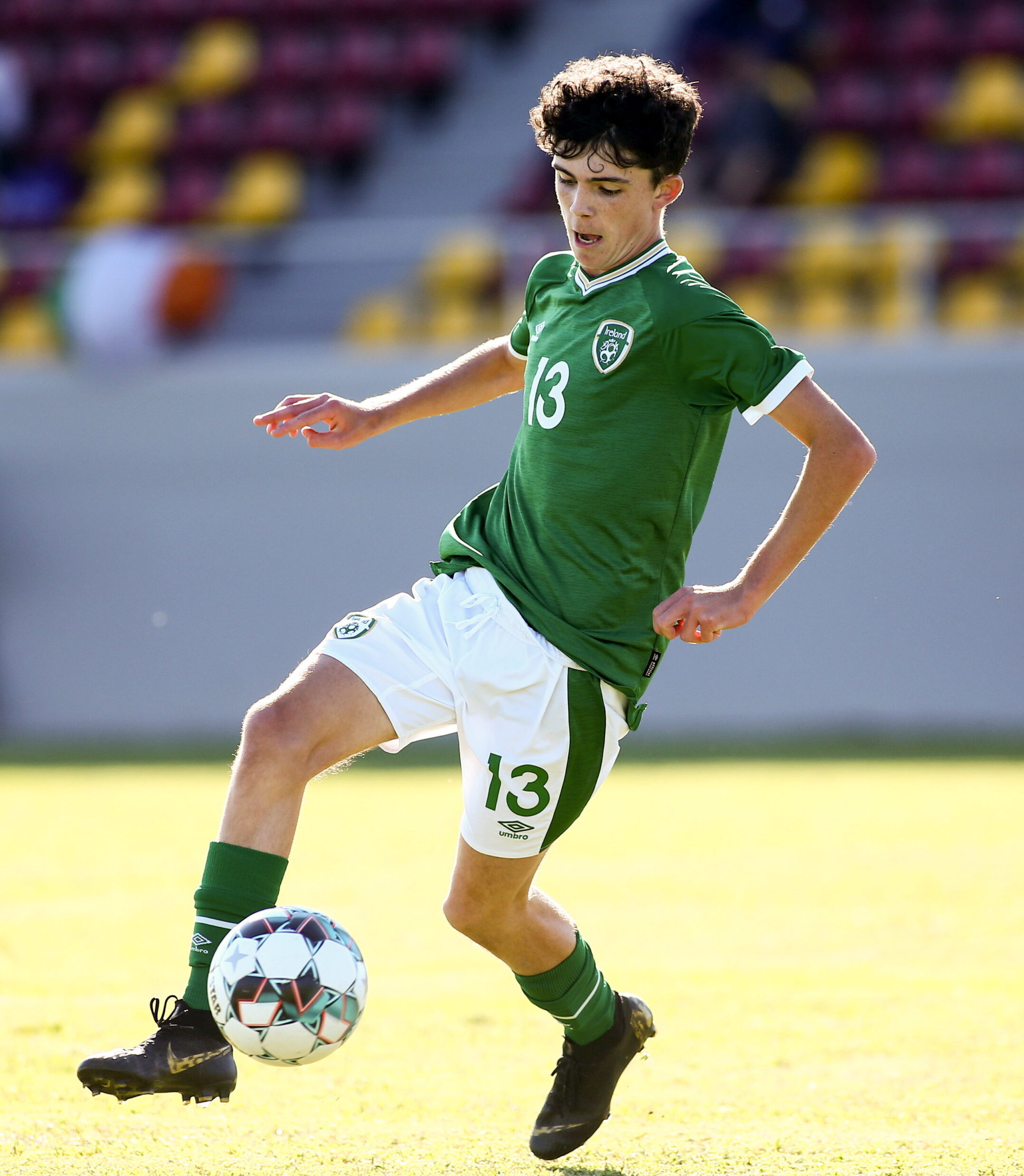 Luke Mulligan on the ball for the Republic of Ireland U15s against Montenegro. Photo by Filip Filipovic/Sportsfile

Dundalk FC U14 head coach Simon Kelly also spoke of his delight at Mulligan’s debut and said his progress was an indication of the squad’s development over the course of the year.

“You can see every week that Luke’s a top player so we weren’t overly surprised to see him get the call-up,” said Kelly. “He’s got a great attitude, he’s a fantastic player and it certainly won’t be the last time he’s called up.

“As I said at the start of the year, they’re a great bunch of lads in this group. They’ve been brilliant all year. We’ve played some top teams in St Pat’s and Galway and run them close. We probably should’ve beaten them both once but it’s a great achievement because they’re very good sides.”

The former Dundalk centre-back also believes that Luke Mulligan will be the first of many players in the U14 squad to make it to the national team.

“I think Luke will be in and around those squads over the next few years, but, hopefully, we can have a few more and more from the other teams as well because there’s no reason why we can’t. We have some excellent players across the academy squads.”

For Luke, he’s hoping this will be the first of many caps, while he also hopes to be lining out for the Dundalk first team in the future.

“The goal for me now is to stay in those Ireland squads and continue developing here at Dundalk and one day, hopefully, I’ll get into the first team and start getting appearances there too.”