Three of the Dundalk FC Academy sides were in EA Sports National Underage League action over the weekend, with a tough set of fixtures for the teams involved.

On Saturday afternoon, Dundalk U17s made the trip to the Brandywell as they took on Derry City in their second meeting of the season.

After being dealt a 2-0 defeat by the Candystripes in their first game of the season back in March, the Lilywhites were keen on gaining redemption this time around, and that was clear in the early stages as their trademark pressing caused Derry huge problems.

In contrast to the first meeting between the sides, it was Dundalk who controlled possession for long spells this time around, and on another day would’ve found themselves a couple of goals ahead by half time, however they just lacked the final pass and possibly sharper finishing at times to finish moves off.

Unfortunately, the Lilywhites found themselves conceding at key points in the game, which put them on the back foot as they fell two goals behind from Derry City goals either side of half time from Brendan Roe just before the break and then Trent Doherty just before the hour mark.

The visitors pulled one back on 63 minutes, as Josh Hand’s pass found Markuss Strods, who finished well to round off an impressive performance on the day. Dundalk then thought they were level a few minutes later, as Hugh Smith had the ball in the back of the net, but he was judged to be offside.

The Lilywhites were left to rue that missed opportunity just moments later as the attack from the resulting free kick led to Derry’s third and final goal of the game to wrap up the points with just over ten minutes to go.

It was a disappointing result for Dundalk but another impressive performance as they aim to get back to winning ways against Finn Harps next weekend. 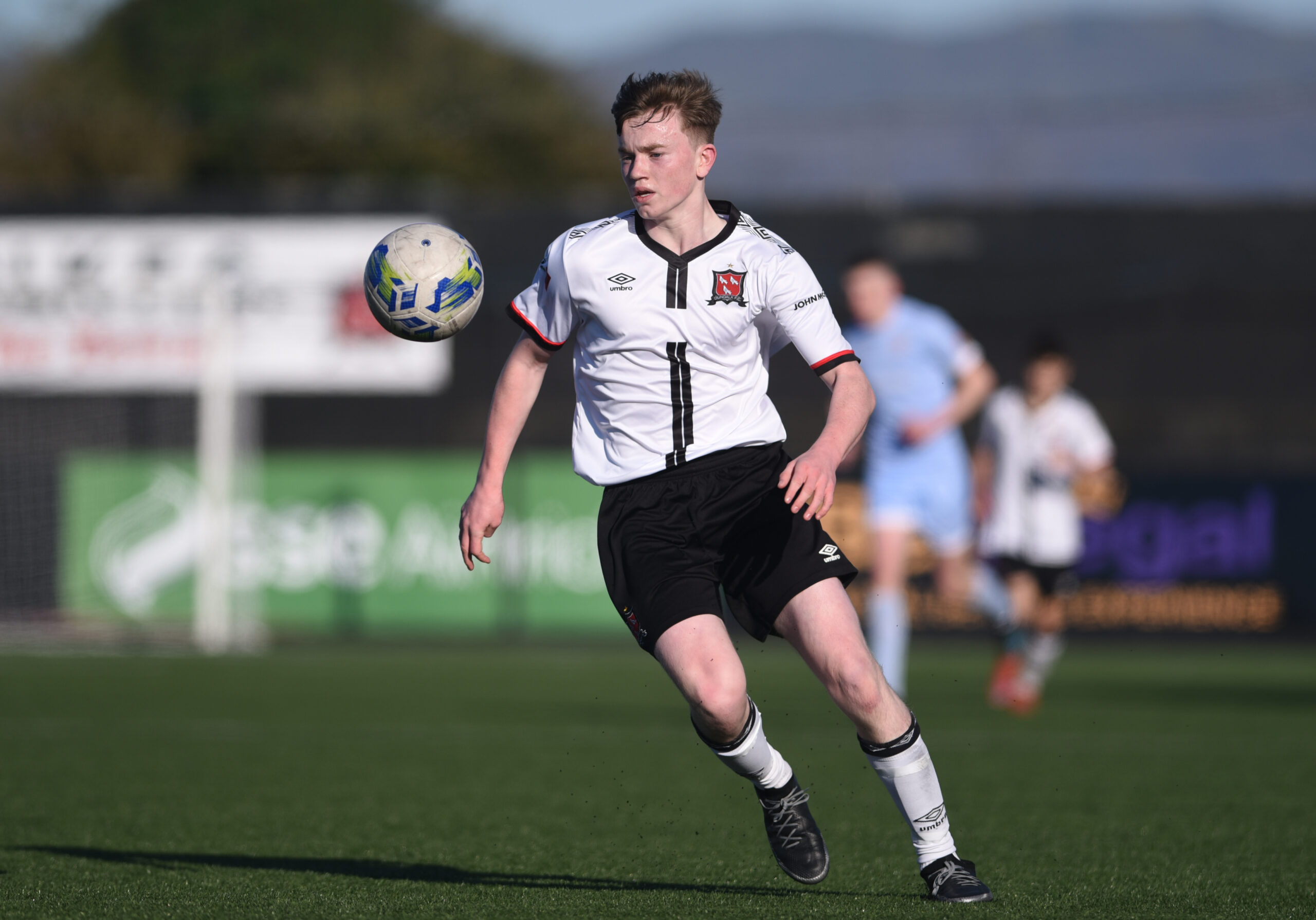 Eoin Murtagh of the U17s

In the first of two matches in Oriel Park on Sunday afternoon, the Dundalk U19s hosted Finn Harps in a game packed with drama and excitement throughout.

The Lilywhites got off to the better start, maintaining possession and trying to open up their opponents, with Harps threatening at times on the counter attack.

However, it was Harps who would draw first blood as Shaun McDermott converted from the penalty spot after 20 minutes after the referee pointed to the spot for a soft challenge from Craig Moore in the box.

Dundalk didn’t let their heads drop after conceding and continued to attack, and they were rewarded just four minutes later as they found their equaliser. Ryan O’Kane picked up the ball to the left of the box, and after getting away from the Harps defender pulling on his shirt, he rifled his effort into the far corner of the net.

Tiarnan Mulvenna’s side continued to pile pressure on the Finn Harps defence and they were awarded a penalty of their own after 35 minutes, after Michael Soyemi was pulled down in the box. Oisin Coleman stepped up to take the penalty and he coolly slotted home to give the home side the lead heading into the break.

The second half continued in a similar vein to the first, as the Lilywhites continued to threaten Harps in search of a third goal. Ryan O’Kane, who was heavily involved throughout, had two great chances in the early minutes of the half, with his first going narrowly wide after beating three men, and his second clipping the far post after breaking away on the right flank. 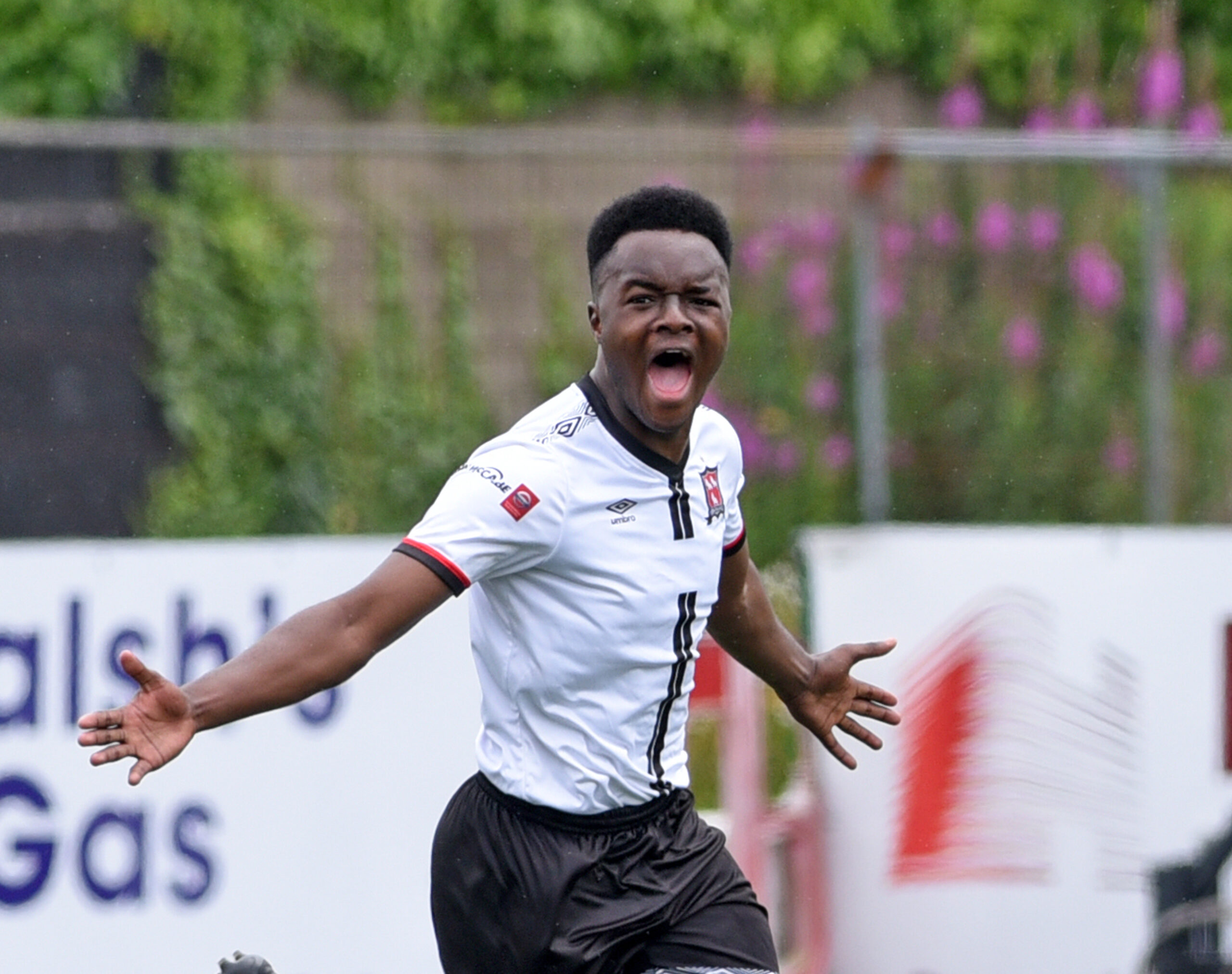 Ebuka Kwelele scored the winner for the U19s

Dundalk looked to be in full control, but tensions rose on the 70 minute mark as the referee pointed to the penalty spot for the third time, awarding Finn Harps a second penalty after a stray arm from Mayowa Animasahun caught a Harps player just inside the box. McDermott stepped up once again to take it, but Jack Harrington produced an excellent save with his legs to maintain the lead.

The hosts saw the rest of the game out until Senan Mullen broke away with a brilliant flick over the opposing player’s head on the inside left channel in the 92nd minute before crossing into the crowded box, and Ebuka Kwelele was on hand to finish the game off and secure all three points for Dundalk.

In the final action of the weekend, Dundalk U15s hosted Bohemians at Oriel Park. After picking up a draw away to Klub Kildare last weekend, the Lilywhites were hoping to build on that with a positive result at home, but it wasn’t to be as an impressive Bohs side ran out 4-0 winners.

Despite the scoreline, it was a promising performance from the hosts, particularly in the first period, when they controlled possession for longer periods and created some good chances, with Runako Sweetman going closest as his strike hit the bar 20 minutes in.

Calum O’Reilly in the Dundalk goal also produced some superb saves in the first period to keep the scores level in the final few minutes of the opening half hour.

Ten minutes into the second half, the deadlock was broken, as Andy Paraschiv drilled an effort into the bottom corner from just inside the box.

Bohs managed to bag a second before the end of the second period, as James Bailey curled an effort into the top corner to take a 2-0 lead into the final period.

The game wasn’t over yet though, as Dundalk continued to cause problems down the flanks and defended well at points to keep the deficit at two goals.

Unfortunately, Bohs managed to kill the game off in the final five minutes with goals from James Bailey and Christopher Conlon to wrap up the three points and keep their spot of second in Group B.