Three of the Dundalk FC Academy sides were in action over the weekend, with some stellar performances from those involved.

In the only action of Saturday afternoon, Dundalk U17s hosted Bray Wanderers in Group B of the Mark Farren Cup at Oriel Park.

With both sides hoping to progress to the quarter finals, there was a tense feeling at Oriel Park as the teams battled for control throughout the first half.

As the first period came to a close, the sides looked to be going into the break on level terms after the previous 44 minutes had lacked many clear-cut chances, but Bray stunned the hosts on the stroke of half time, as Conor O’Gorman went through on goal and rounded Jamie Ryan in goal to slot the ball home and give the visitors the lead going into the break.

The Lilywhites regrouped at the break and came out swinging at the start of the second period, pinning Bray back in their own half and forcing them into mistakes as they passed the ball around the defensive third of the pitch. The hosts were soon rewarded for their efforts, as Josh Hand latched onto Hugh Smith’s through ball to equalise just after the hour mark. 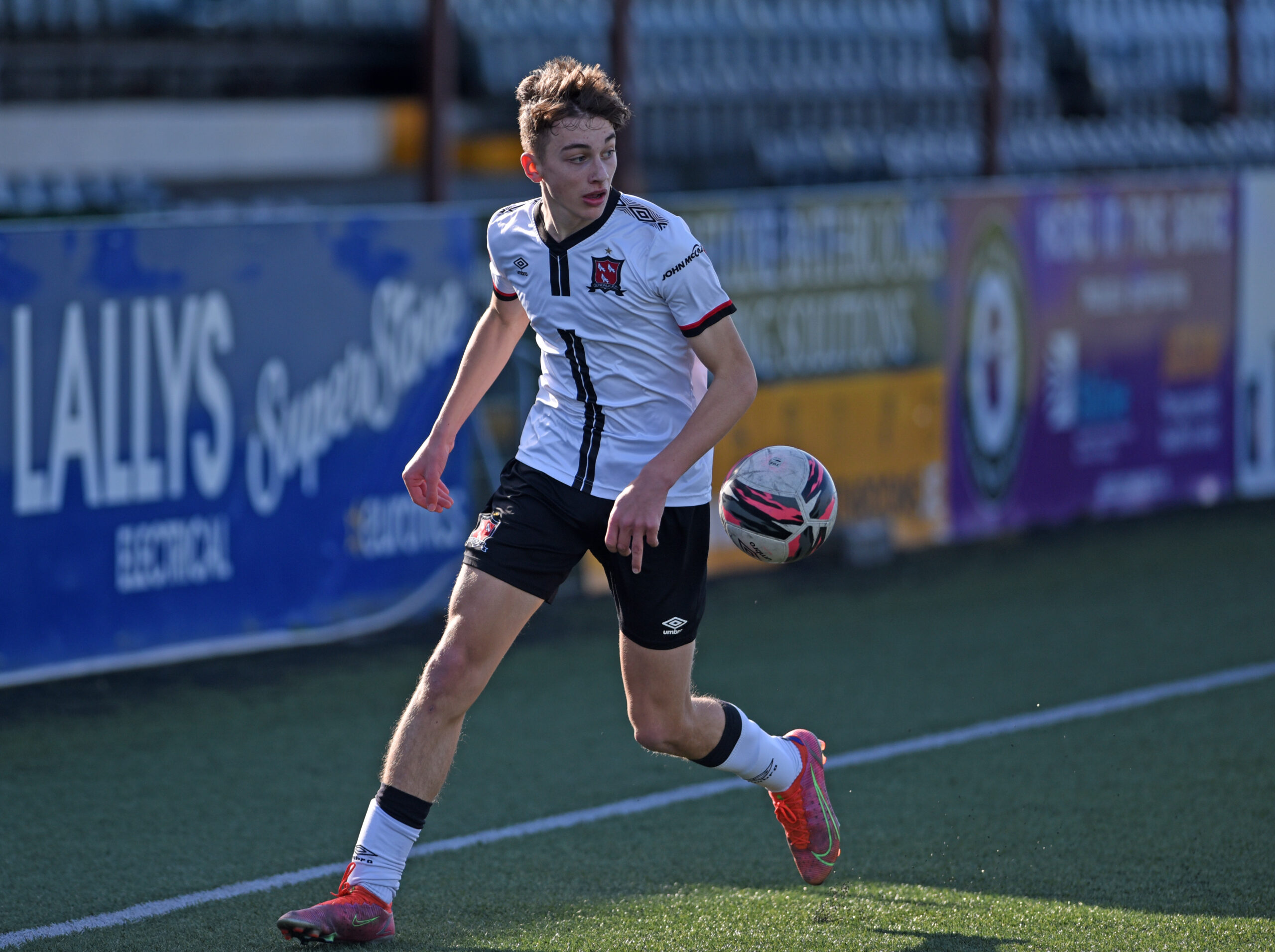 Hugh Smith of the U17s

The momentum swung in Dundalk’s favour after the equaliser and they had a second goal just fifteen minutes later, as Smith capitalised on a defensive mix-up to go through on goal and bury his strike in the bottom corner.

The hosts looked to have the result sewn up as the clock ticked past 90 minutes, but there was to be one more chance for the away side. A ball was dinked into the box and a moment of hesitation from a Dundalk defender and Jamie Ryan allowed Max Mason to get a touch on the loose ball and equalise with virtually the last kick of the game.

Despite the disappointing finish, Dundalk can be happy with the overall result as they progress to the quarter finals of the 2022 Mark Farren Cup, and can for now turn their attention back to league football this weekend.

On Sunday afternoon, Dundalk U15s played their first game of the second phase of the season, as they took on Athlone Town in the U15 National Underage League Tier 3.

In one of their most impressive performances of the season so far, Simon Kelly’s side controlled the game for large periods, and created a number of promising opportunities, just failing to find a finishing touch.

As the minutes ticked on, the teams looked to be heading for a draw, but the Lilywhites were dealt a sucker punch late on, as Eoin Morgan scored to snatch the three points for Athlone, and leaving the visitors disappointed after a controlling display. 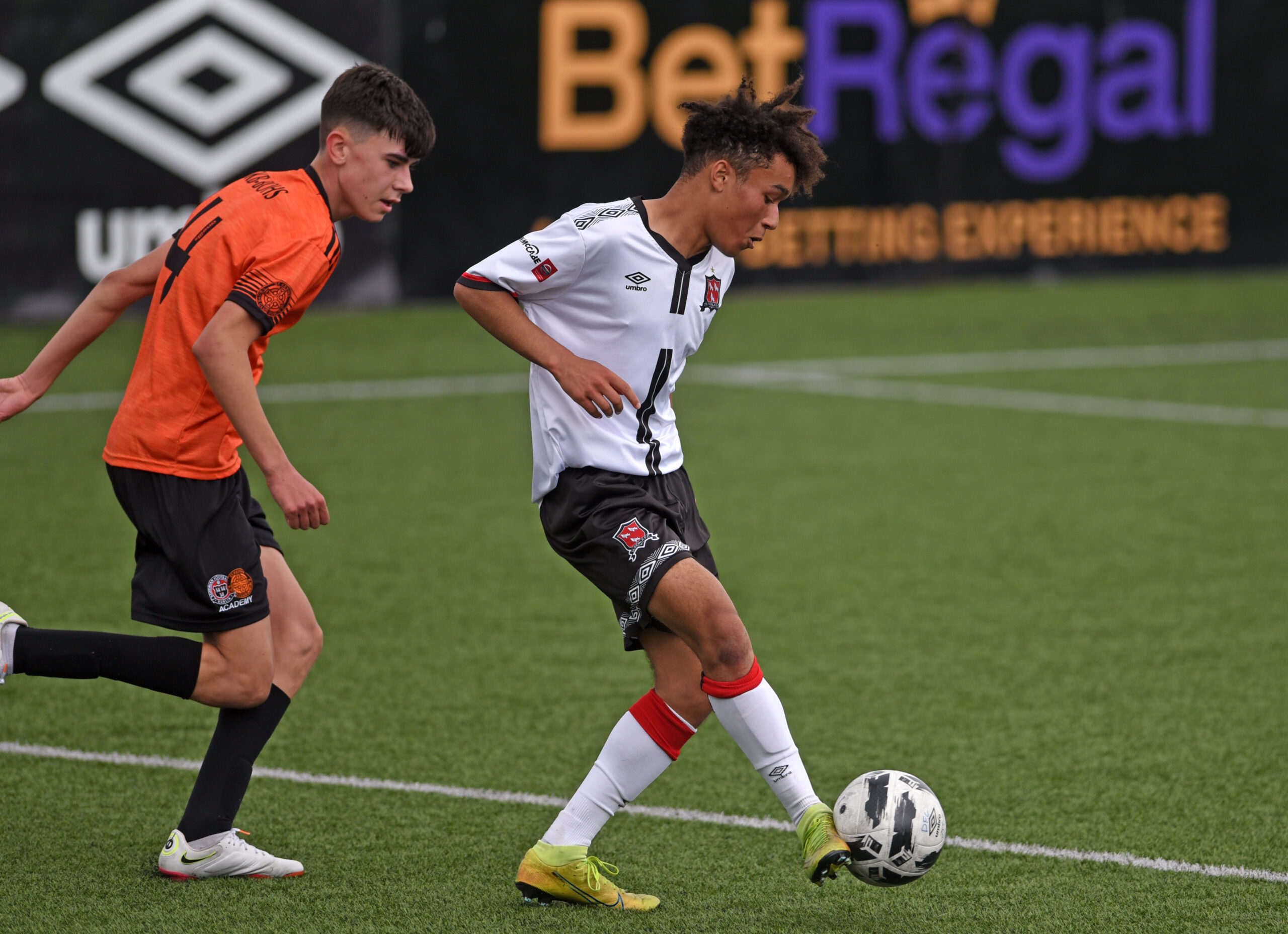 Runako Sweetman of the U15s

In the final action of the weekend, Dundalk U19s made the trip to Dublin to take on Bohemians.

In a performance of the highest quality, the Lilywhites extended their unbeaten run to four games as they ran out 5-1 winners at Oscar Traynor Road.

Goals from Anthony Moyo (2), Eoin Kenny (2) and Oisin Coleman secured a brilliant win for Tiarnan Mulvenna’s side, who continue to impress against the best teams the country has to offer.