The Lilywhites made the trip north looking to close the gap on the teams in the top half but McGonigle’s strike condemned them to defeat in the Maiden City for the first time since October 2012.

The result leaves Vinny Perth’s side just two points above the relegation playoff spot but the Dundalk head coach’s immediate concern will centre on the welfare of David McMillan.

The striker, who was in clear discomfort, was carried off on a stretcher with just eight minutes to go. Dundalk also lost Patrick McEleney and Daniel Kelly to injury in the first half. All in all, it was a day to forget. 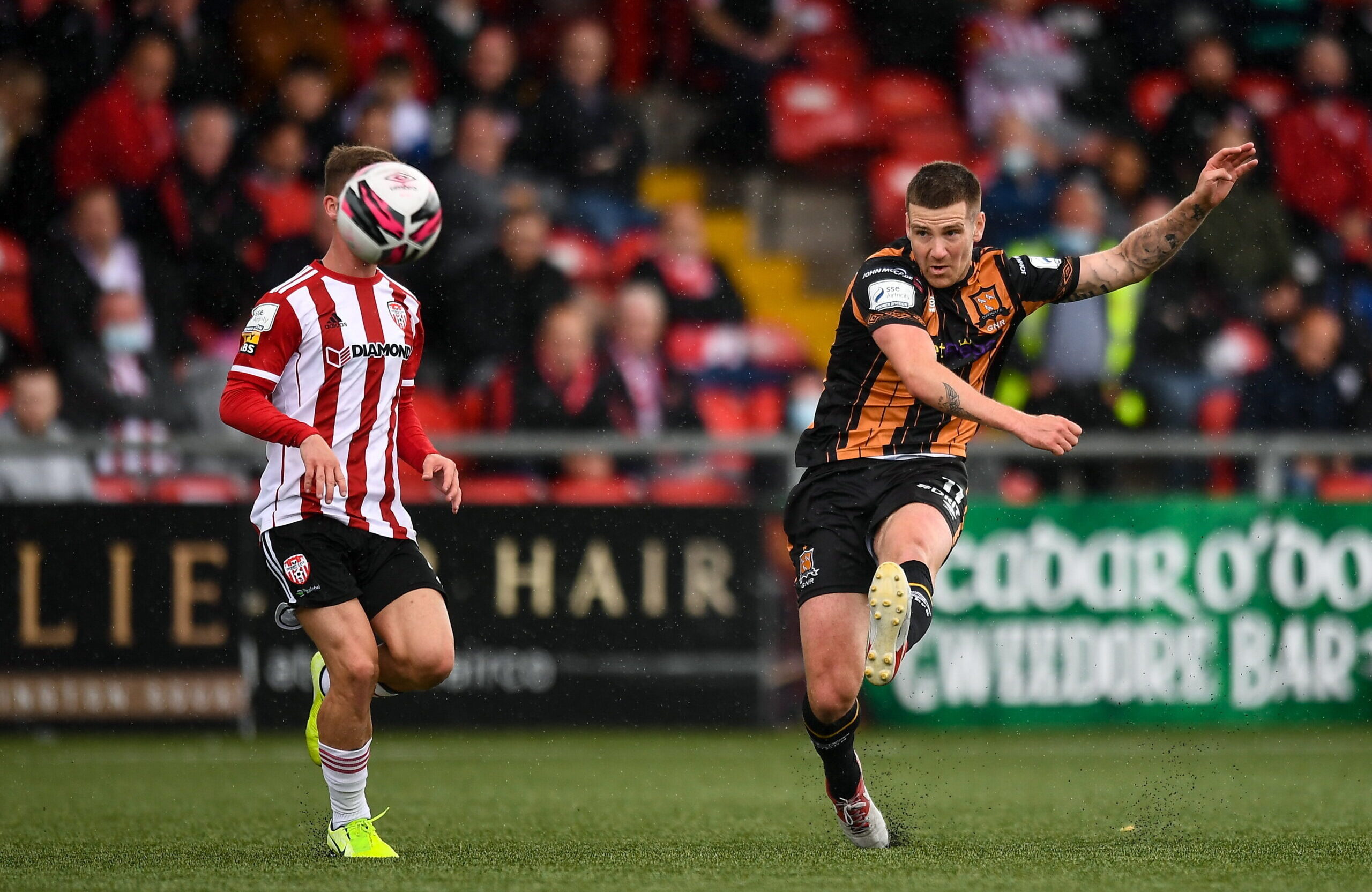 Patrick McEleney has a shot on goal despite the attention of Caoimhin Porter of Derry City during the SSE Airtricity League Premier Division match at the Ryan McBride Brandywell Stadium in Derry. Photo by Ben McShane/Sportsfile

As expected, Perth made five changes to the side that played against Vitesse Arnhem less than 72 hours earlier with Raivis Jurkovskis, Daniel Kelly, Sean Murray and David McMillan restored to the starting XI. The big news, however, was the appearance of Daniel Cleary on the team sheet, the central defender making his first outing in over three months after recovering from a serious hip injury.

The hosts started with plenty of energy and Ronan Boyce skimmed a cross over from the right to pick out Jamie McGonigle but his header cleared the bar with just four minutes on the clock. Cleary and Andy Boyle defended their penalty area well as Derry continued to push Dundalk back and Alessio Abibi had to gather an Evan McLaughlin shot from distance.

With Patrick McEleney and Sam Stanton trying to become an influence, Dundalk settled into things at the midway point of the half and Daniel Kelly was unlucky to see the ball just get away from him when he raced through with just Nathan Gartside to beat.

McEleney’s afternoon came to a premature halt when he limped off with half an hour played after a collision with Danny Lafferty. Cleary was booked for his reaction to the foul with McEleney replaced by Will Patching, who enjoyed a terrific loan spell at the Brandywell during the first half of the season.

Jurkovskis followed his fellow defender into the book for halting Joe Thomson’s run into the Dundalk box with 36 minutes played. The 1,150 in attendance wanted a penalty but referee Damien MacGraith, with the assistance of his linesman, awarded a free which Lafferty curled high over the bar.

Perth was forced into another reshuffle before the break when Kelly was forced off with an impact injury. Another former Derry City player, Greg Sloggett, entered the fray in his place and chances fell for both sides before the half-time whistle blew.

The Lilywhites almost nabbed the lead through David McMillan, who saw a low volley, and a long-range drive saved by Gartside in quick succession. At the other end, Thomson looked set to give Ruaidhri Higgins’ men the advantage when he brilliantly spun away from Jurkovskis but his right-footed effort came back off the outside of Abibi’s upright. 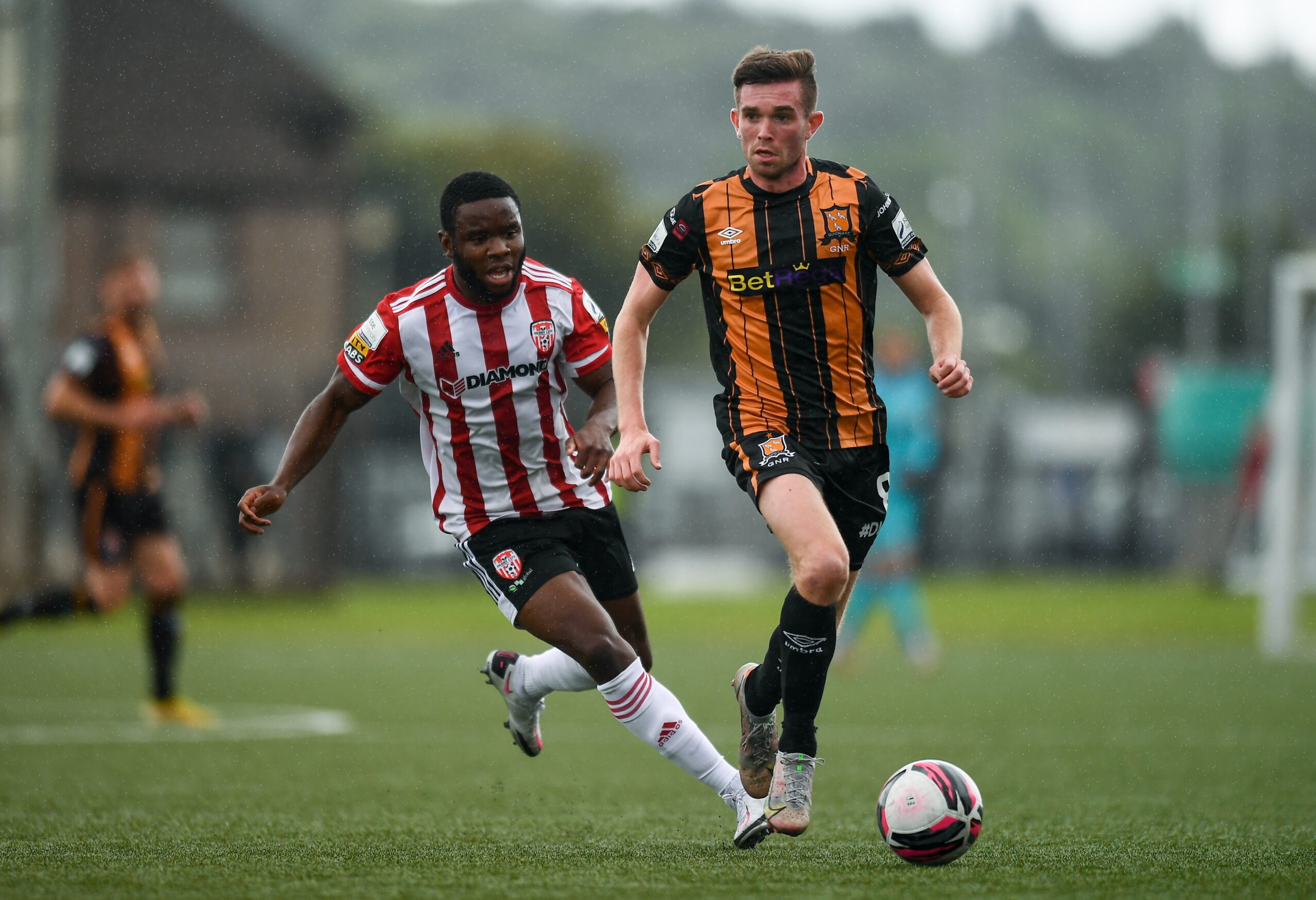 The second half was just six minutes old when the natives edged in front. Referee MacGraith, again with the assistance of his linesman, adjudged that McGonigle’s volley was handled by Boyle. The decision looked extremely harsh on the Dundalk skipper but McGonigle showed no mercy, sending Abibi the wrong way.

Michael Duffy almost replied in the 59th minute after cutting in from the left but his curling effort was deflected wide of Gartside’s far post and Perth turned to his bench for the third time by introducing Patrick Hoban for Sean Murray three minutes later.

Things went flat as the game entered the final 20 minutes but Dundalk showed a spark when Hoban picked out Duffy with a clipped ball but the winger’s header just didn’t have the power to trouble Gartside.

Thomson then squandered a good opportunity to test Abibi after being cued up by the busy James Akintunde as the clock ticked away on the visitors.

Things went from bad to worse in the 82nd minute when McMillan was stretchered off. After making three earlier substitutions, it meant Dundalk had to see the game out with 10 men.

Seven additional minutes were added on but the Candsytripes saw it out and the celebrations that greeted the final whistle showed just how long, and how much, the home support had been waiting for this win.

Two home games. A Louth Derby against Drogheda United, in front of 500 supporters, at Oriel Park on Friday, August 20th at 7.45pm, followed by the Extra.ie FAI Cup second-round tie against St Mochtas a week later.