Dundalk were defeated 2-1 against Vitesse Arnhem on Thursday night which put an end to their involvement in the 2021-22 UEFA Europa Conference League at Tallaght Stadium.

First-half goals from Matus Bero and Yann Gboho put the Eredivise side through. Patrick Hoban netted a late penalty to spark a fightback in the closing stages but it wasn’t enough.

Dundalk started the brighter of the two sides and Michael Duffy had the ball in the net in the opening stages with a sublime finish however he was ruled out for offside in what was a marginal decision.

Patrick Hoban came to the rescue of his goalkeeper after he punched a corner towards his own goal but the centre forward cleared in the fifth minute.

Dundalk should have really taken the lead when they had three chances in the space of a minute. 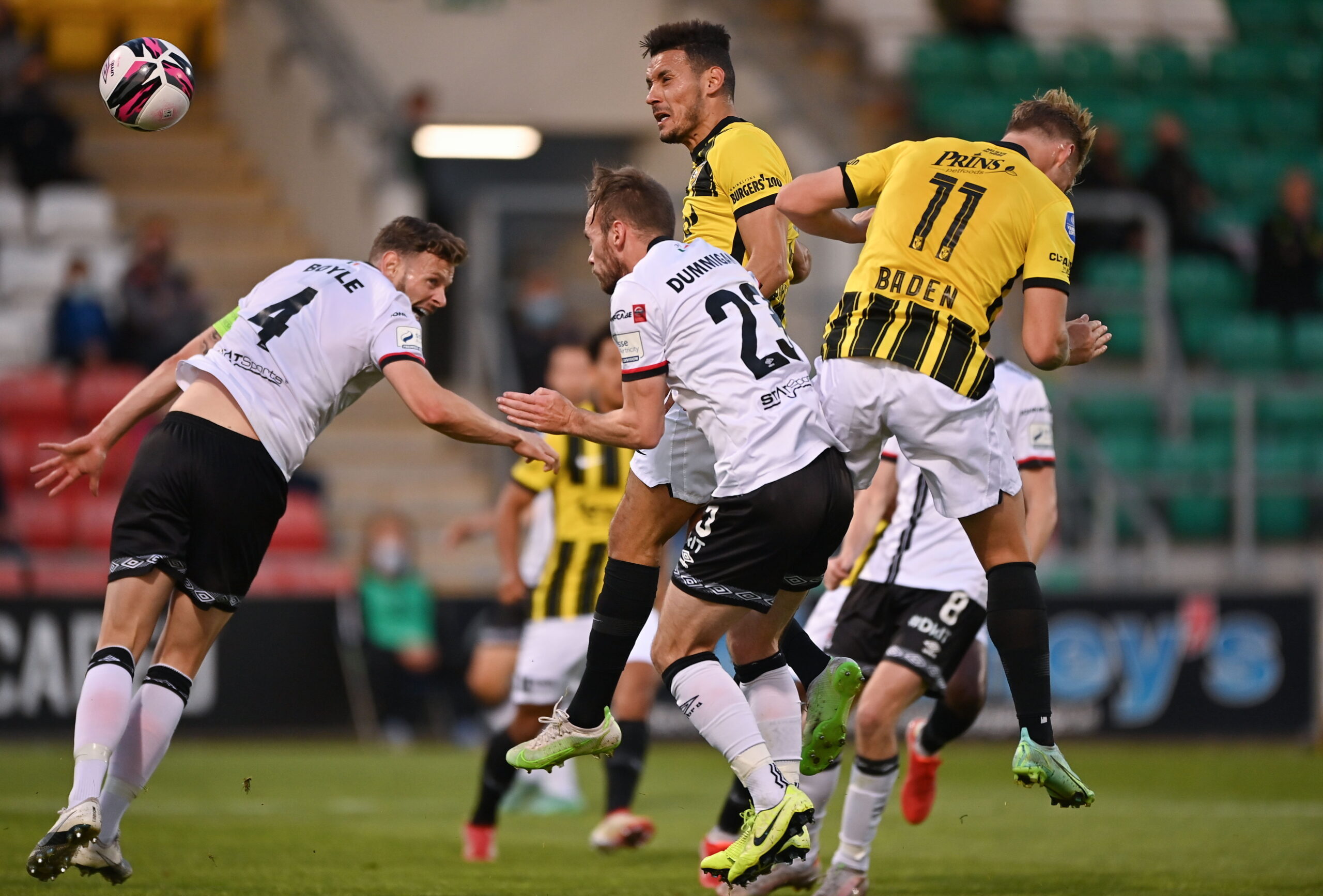 Oussama Darfalou gets a header on goal. Photo by Seb Daly/Sportsfile

Patrick Hoban forced a good fingertip save from Markus Schubert which forced a corner. The corner from Patching dropped to McEleney next and his drive was pushed away by the goalkeeper also for another corner.

The third one found Sonni Nattestad but his header came off the crossbar and away to safety.

The Lilywhites would be made to rue those missed chances when Vitesse took the lead just before the half hour mark. 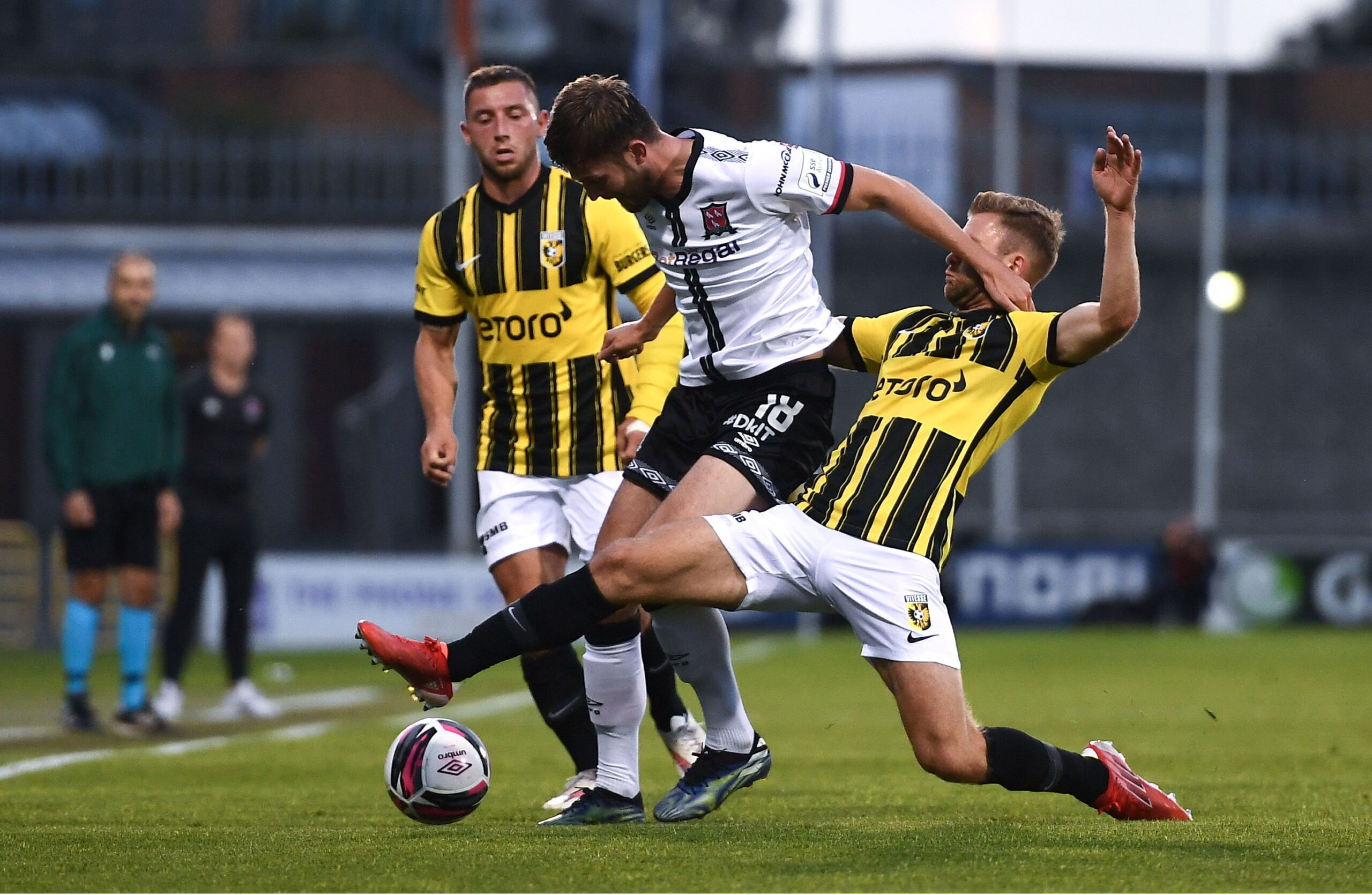 Will Patching in action against Vitesse. Photo by Ben McShane/Sportsfile

Frederiksen’s shot from the edge of the area deflected off Andy Boyle and into the path of Matus Bero who finished to the net from point blank range.

It was 2-0 after 38 minutes when Yann Gboho got in behind and finished calmly to the net past Abibi.

The half-time break came and we were 2-0 down with no changes after the restart.

It was a positive opening to the half with McEleney shooting goalwards with his effort blocked by Hoban before Duffy had a looping header go just wide of the post from the edge of the area.

Vitesse retreated, happy with their lead, but were still dangerous on the counter attack with Riechaldy Bazoer shooting from distance twice but both efforts blocked down. 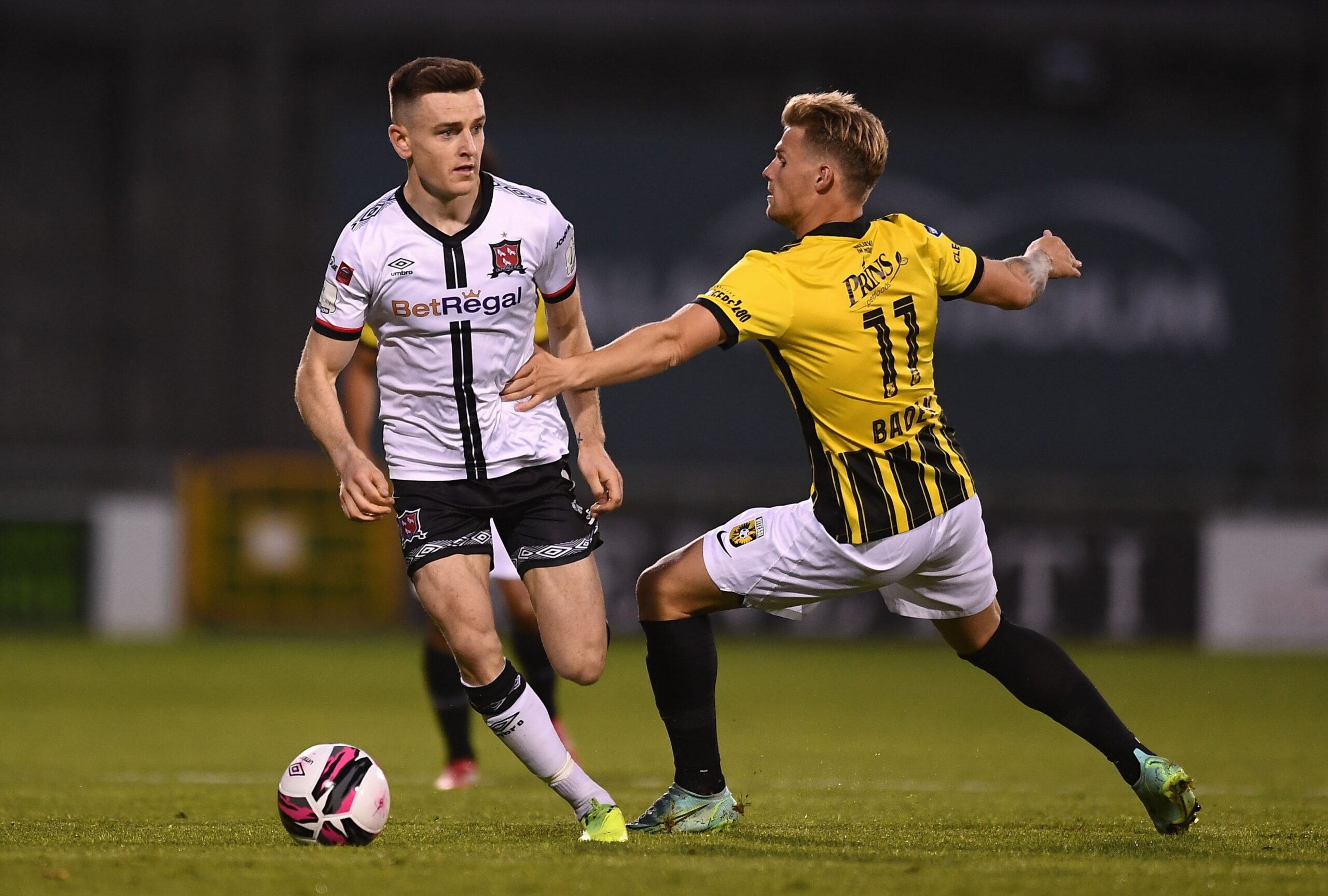 Darragh Leahy skips away from Frederiksen. Photo by Ben McShane/Sportsfile

The Lilywhites found a way back into the match when Sondre Trondstad fouled Michael Duffy in the area.

The referee pointed to the spot and Hoban sent the goalkeeper the wrong way to make it 2-1.

Dundalk pushed forward in search of that equaliser and substitute David McMillan flashed an effort inches wide of the post after he teed himself up from 30 yards.

Schubert came to the rescue for Vitesse next when he produced a stunning stop to deny a Duffy special from the edge of the area.

The goalkeeper again kept Vitesse in front with the follow up found its way to the head of Raivis Jurkovskis but Schubert clutched to his chest.

McMillan forced the goalkeeper into action next but his header was easy for him to gather.

It looked like the Lilywhites had got their leveller when Daniel Kelly got in behind and his cross just evaded the stretching McMillan with the stadium on their feet.

That proved to be the final action of note and the final chance for Dundalk to rescue things and their European campaign for 2021 came to an agonising end.