Dundalk will be hoping that history repeats itself when they take on Finn Harps in the quarter-finals of the Extra.ie FAI Cup in Ballybofey on Friday night.

The Lilywhites have gone on to lift the trophy on four of the last five occasions that the sides have met in the competition and are unbeaten in nine FAI Cup ties against Harps.

A win at Finn Park would leave Dundalk just one victory away from a record-breaking seventh successive FAI Cup final appearance at the Aviva Stadium.

For Harps, it’s an opportunity to take a further step towards bridging a 47-year gap from their only FAI Cup win back in 1974.

1969/70: A thrilling trilogy
Following their introduction to the League of Ireland in 1969, Harps went on to play Dundalk on six separate occasions during their maiden campaign.

Paired together in the first round of the FAI Cup, the teams met at Finn Park on Sunday, February 1st, 1970. Despite having no shelter, a bumper crowd of 8,000 – which was supplemented by hundreds of Dundalk fans – braved the torrential rain, which quickly turned the pitch at Finn Park into a swamp!

With the pitch markings quickly fading, and water flying in every direction, referee Billy O’Neill called the game to a halt after 57 minutes with the score locked at 1-1.

“There was no other decision that the referee could make,” said Dundalk manager Liam Tuohy afterwards. “It was almost impossible to hold your feet. The referee was right to call it off when he did and with the score at 1-1, no team could complain.”

Paddy Turner grabbed Dundalk’s goal with the great Brendan Bradley, who scored against Touhy’s men on his Harps debut in a Shield encounter earlier that season, on target for the hosts.

After seeing an appeal to replay the game at a neutral venue overruled by the FAI, Dundalk were back in Ballybofey for the refixed game on Wednesday, February 11th.

Once again, they were backed by a large travelling support with the Democrat reporting that ‘one local factory had arranged to work overtime on two nights so that the men could get the day off and travel to Ballybofey’.

Dundalk got off to a flying start when Turner collected a pass from Turlough O’Connor to slot the ball home just seconds after the game had kicked off but Bradley’s 13th-minute equaliser forced a replay at Oriel Park two weeks later.

Buoyed on by a crowd of 5,500, the biggest of the season, Dundalk produced one of their finest performances under Tuohy with Kevin Murray (2), Tony Bartley and Paddy Turner all on the scoresheet in a 4-0 win.

The star of the show, however, was a young Thomas McConville who shackled the ominous threat posed by Bradley. Speaking after the game, Tuohy told the Democrat: “Thomas looked like the best centre-half in the league.”

After overcoming Athlone Town in the following round, Dundalk’s cup hopes were ended by Bohemians in a semi-final replay. 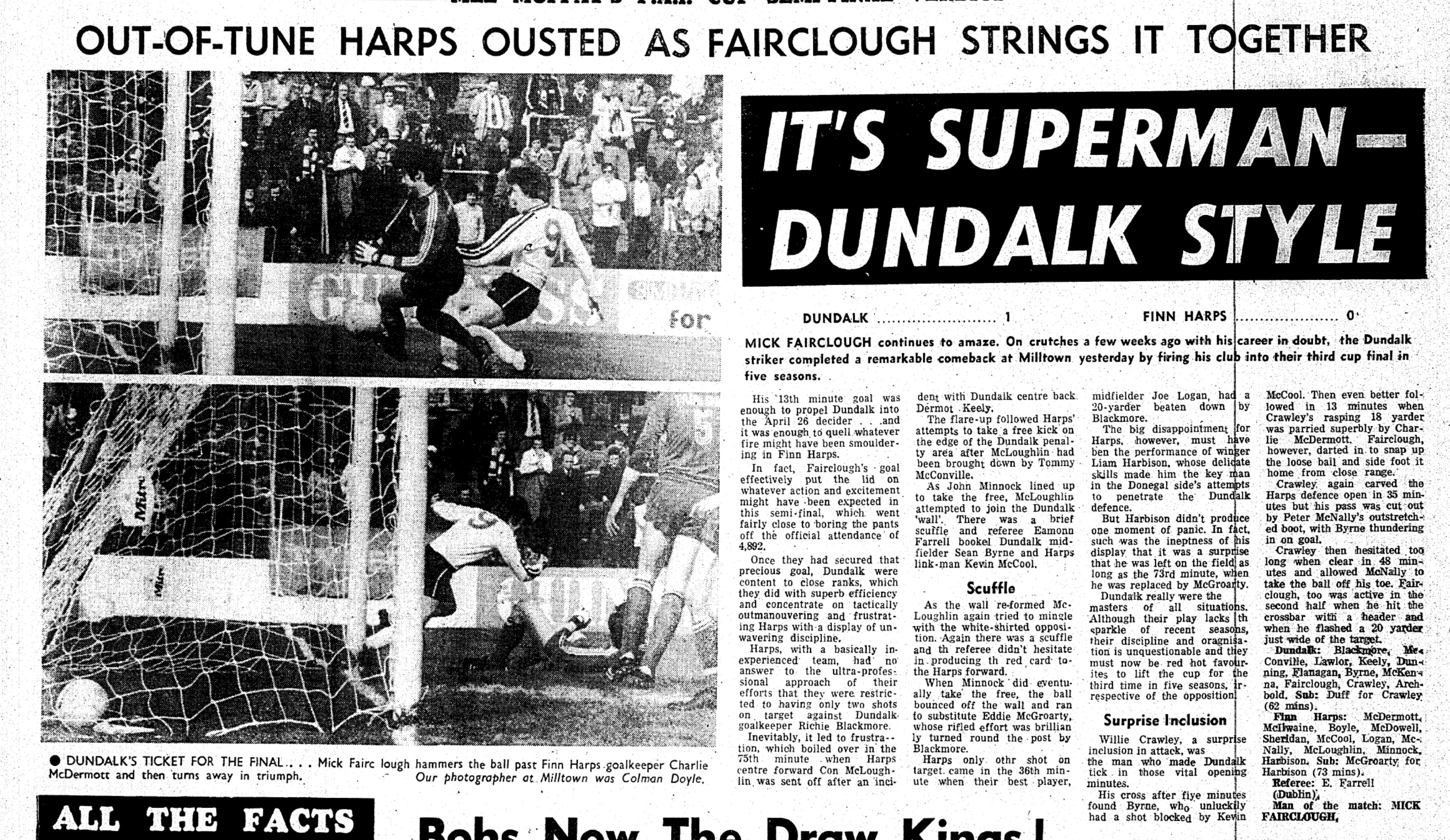 6 April 1981: A report from the FAI Cup semi-final between Dundalk and Finn Harps at Milltown

1979/80/81: A successive trilogy
Milltown was the venue for the semi-final meeting between the clubs on Sunday, April 5th, 1981 when a Mick Fairclough strike was enough to book Jim McLaughlin’s side a place in the final for the third time in the space of five seasons.

Played in front of 4,892 people, Fairclough scored the only goal of the game with 18 minutes played. Willie Crawley, who kept his place in the team after playing so well in the quarter-final replay win over Drogheda United, saw his effort saved by Charlie McDermott but Fairclough reacted quickly to side foot the loose ball home from close range.

The 1980/81 season was the third consecutive campaign that the clubs had crossed paths in the competition. In 1979, a Jimmy Dainty penalty, coupled with Cathal Muckian’s strike, was enough to give Dundalk a 2-0 win in a quarter-final tie at Oriel Park. The Lilywhites went on to complete a league and cup double.

In 1980, Dundalk beat Harps again, this time in the last 32 where goals from Brian Duff, Synan Braddish and Terry Harkin sealed a 3-1 win but Jim McLaughlin’s men saw their defence of the trophy ended by Limerick in the next round. 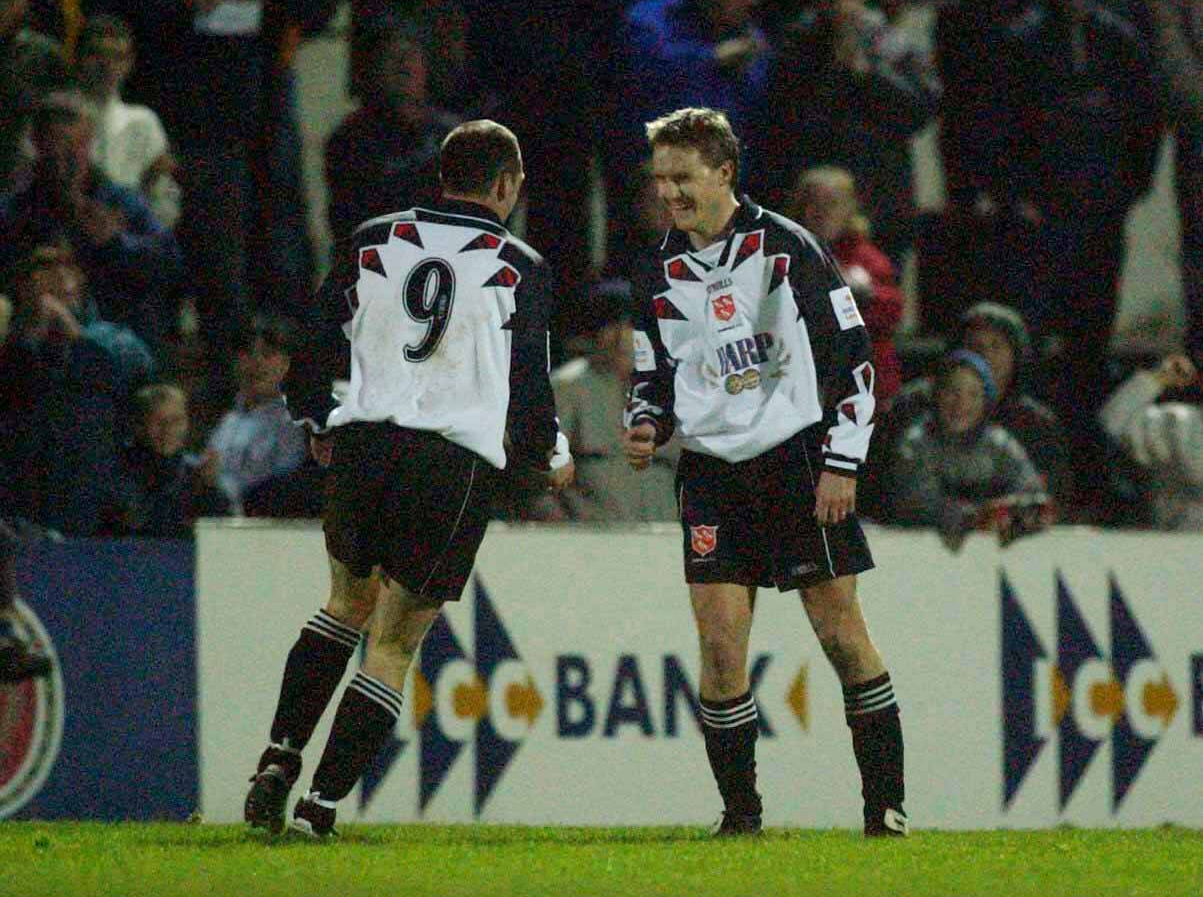 2002/2008: Keddy and Kelly
In 2002, Martin Murray’s cup winners beat Harps in the last eight. After a 1-1 draw at Oriel Park; Martin Reilly scoring for Dundalk, James Keddy hit a brace in the replay. Dundalk went on to beat Bohemians in the ‘Gary Haylock final’ at Tolka Park.

Dundalk’s most recent victory over Harps came in Stephen Kenny’s final season at Oriel Park in 2018. Goals from Ronan Murray and Georgie Kelly secured Dundalk’s passage to the last eight thanks to a 2-0 win over Ollie Horgan’s men at Oriel Park. The season ended with a fourth league and cup double thanks to Patrick McEleney’s header against Cork City at the Aviva Stadium.