Dundalk FC Academy player Luke Mulligan says he was ecstatic and honoured to receive another call-up to the Republic of Ireland U15 squad earlier this month, and the young defender hopes to earn more over the coming months.

Speaking earlier this week, Mulligan said he was delighted to return to the international fold.

“It was great to get the call to come back into the side,” he said.”Getting to represent your country at a high level like that is such an honour, I couldn’t have been happier to be part of the squad.”

Mulligan started both games for Ireland, including featuring at the back in a tightly contested 3-2 win over Wales in Newport. Having been involved with both the U15 and U17 sides at club level this season, he believes it has aided him in his development to receive feedback from both sets of coaching staff.

“Playing with the U17s is obviously very challenging, considering I’m playing with some lads that are two years older than me, but it’ll only help me improve in the long run being part of the squad and getting that feedback from James Toner and the rest of the coaching team in the U17 squad. 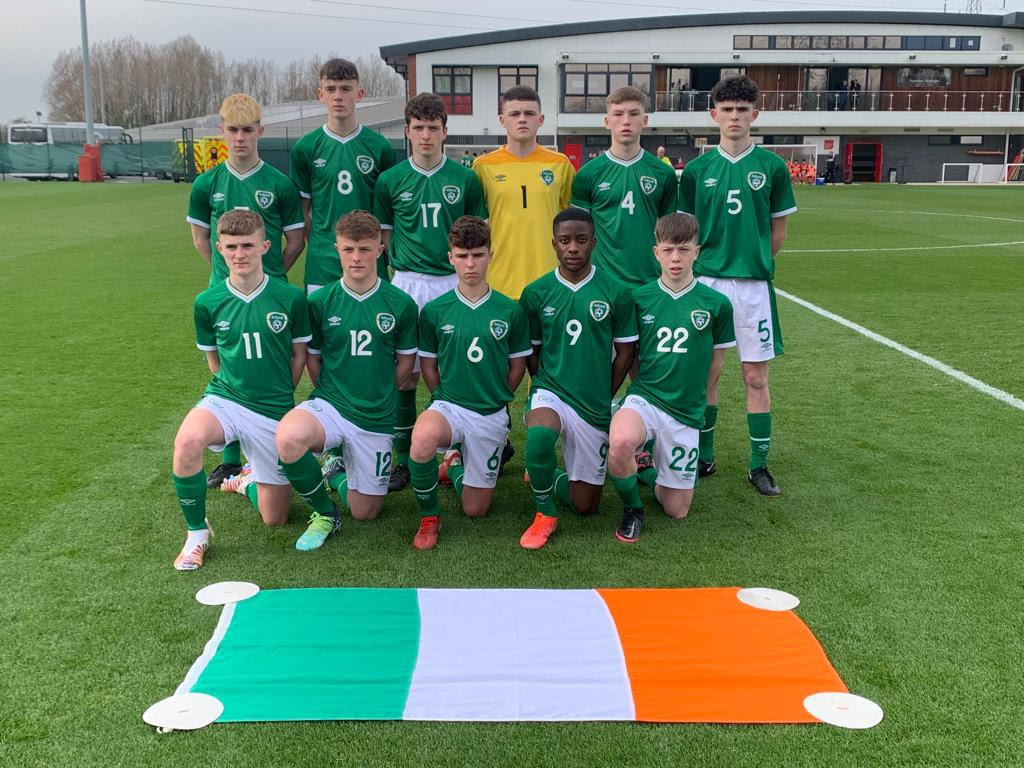 Luke Mulligan (back row, right) lining out for the Republic of Ireland’s U15 team against Wales recently.

“It’s also been good to stay with the lads I would’ve played with last year and keep that chemistry that we built up over the course of last season, and Simon Kelly’s input has helped me to improve massively aswell.”

The young defender featured for the U15s in their late defeat at home to Athlone Town at the weekend, and despite the result, Mulligan feels that the performances will eventually shine through and help deliver a winning result.

“We’ve been quite unlucky so far I think. We’re always good for the first sixty minutes, then we seem to fall away in the last half hour or so. I’m not really sure why that is but I think as soon as we get that first win and that confidence boost then we’ll be flying.”

For Mulligan personally over the course of the 2022 season, he remains focused on continuing his development and playing plenty of football, both at club and international level.

“The goal for me is to play as much as I possibly can for both Dundalk and Ireland over the course of this year. Obviously playing as much as possible at Dundalk will be key to getting those call-ups so as long as I keep my head down and keep working hard, then I’m sure the international call-ups will come round again.”