This evening’s game with St Mochta’s will be Dundalk’s 37th FAI Cup tie against non-league opposition. While the club’s record in these cup ties has been generally good, unfortunately, there have been six notable defeats over the years, and a couple of close-run games as well! We take a look back.

2001: Portmarnock
While Dundalk have recorded five straight wins in the past 20 years against St Pat’s CY, Malahide United, Phoenix and Crumlin United (twice), the FAI Cup defeat to Portmarnock on April Fool’s Day 2001 still occupies a dark space in our collective memories!

It is not just the 1-0 defeat to the non-league side that will ensure that game will linger long in the memory; it also coincided with the country being in the midst of the foot and mouth outbreak! 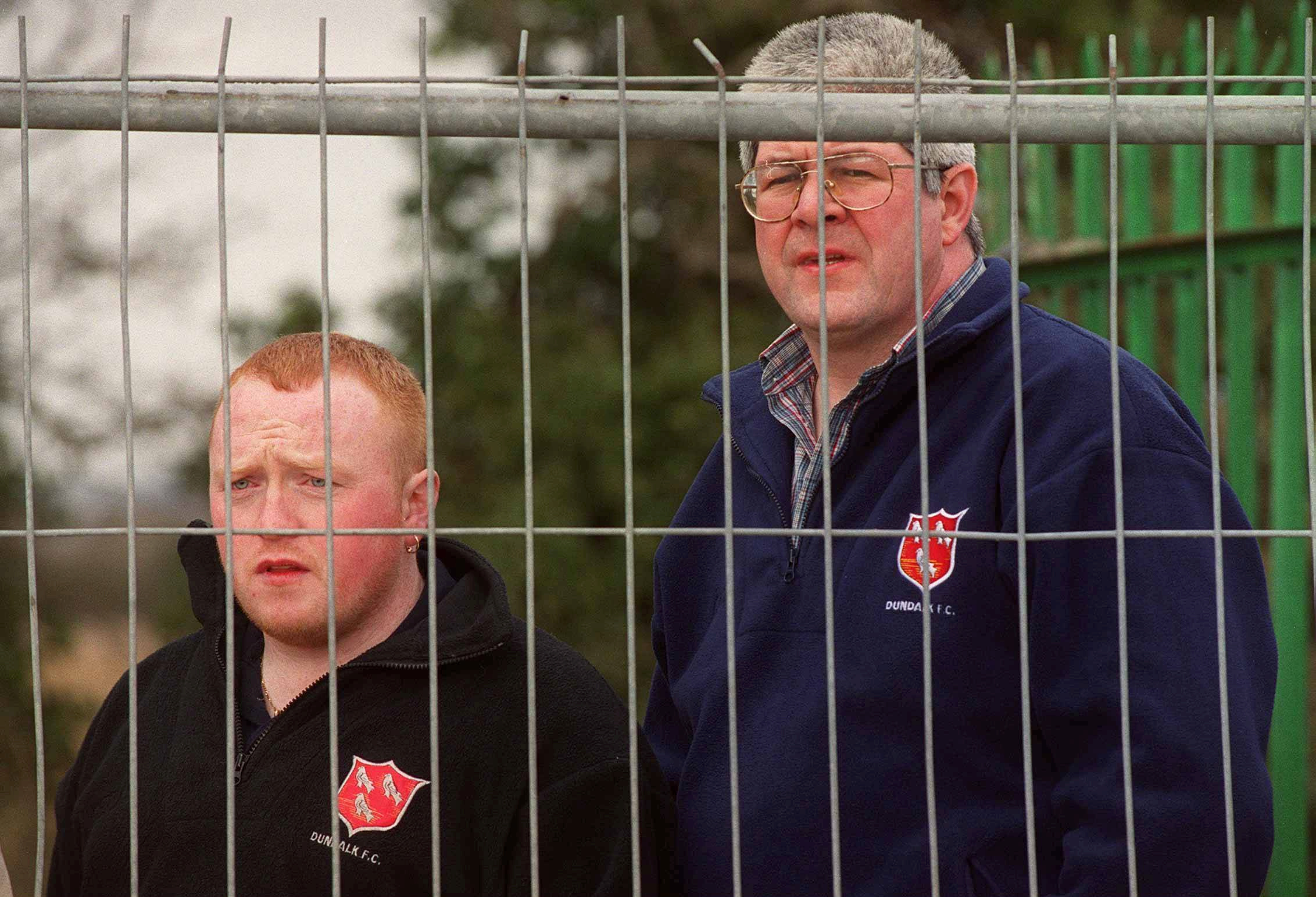 Dundalk supporters Ian Sharkey and Ronan Corrigan watch the FAI Lager Cup Third Round match between Portmarnock and Dundalk that was held behind closed doors as a precautionary measure against Foot and Mouth disease. Photo by David Maher/Sportsfile

The game was finally played behind closed doors at St Francis’ ground in Baldonnell, and despite John Connolly saving a Craig Bolton penalty, Portmarnock’s Keith Bruen scored with a header from the resulting corner to seal a famous win for the Dubliners.

It was the sixth time that Dundalk had been dumped out of the FAI Cup by non-league opposition but even though it was an embarrassing defeat, the Lilywhites more than made up for it by securing promotion back to the top-flight as Division One champions that season before adding the FAI Cup a year later.

Coincidentally, Portmarnock were beaten on penalties at the quarter-final stage to a Longford Town side that was managed by Stephen Kenny. A certain Vinny Perth was one of his players.

1991: Ashtown Villa
While the 1990/91 season is fondly remembered in these parts as another league-winning season, the only blot on the copybook came in the FAI Cup first-round tie against AUL side Ashtownvilla at Oriel Park on March 10th.

After squandering several scoring chances, Dundalk were ultimately punished when Sean Murphy scored an 88th-minute winner for the visitors. To date, this has been the only time that Dundalk have been beaten by non-league opposition at Oriel Park. We all hope that statistic remains intact after this evening’s tie!

To prove this was no fluke result, Ashtownvilla repeated the result with an away win at the Brandywell against Derry City in the next round before finally bowing out to Kilkenny City. Twenty-two years later, Dundalk exacted some measure of revenge for the defeat when they beat Phoenix FC, which was an amalgamation of Ashtownvilla and Kinvara Ards! 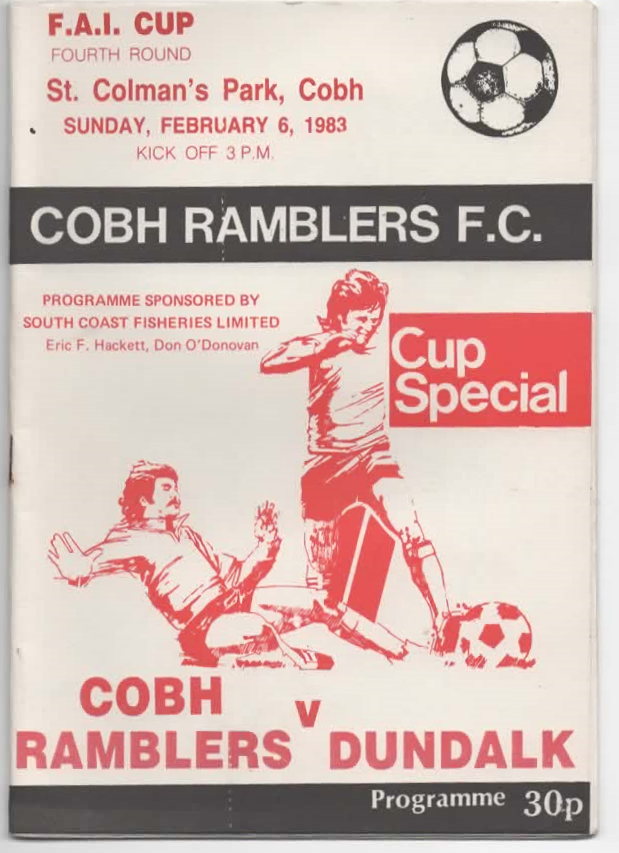 1983: Cobh Ramblers
As reigning league champions, Dundalk were red-hot favourites to overcome Cobh Ramblers, then a non-league side, when the sides were drawn against each other in the 1983 FAI Cup.

The game took place at St Colman’s Park on February 6th in front of a massive attendance of 4,000 spectators and goals from Fergus McDaid and Eddie O’Halloran secured the hosts a famous 2-1 win. John Archbold pulled a goal back before half time but the second-half dismissal of Noel King didn’t help Dundalk’s cause.

Cobh went on to eliminate Finn Harps in the quarter-final to set up a semi-final meeting with Sligo Rovers. The tie has gone down in FAI Cup folklore as it took four games to produce a winner, with Sligo finally progressing to the decider where they beat Bohemians 2-1 to finally get their hands on the famous old trophy.

The rest
Our other defeats to non-league teams came against Distillery (Dublin) in 1940, AOH Cork in 1950 and the Workman’s Club in 1956.

After our defeat to AOH Cork, the teams were drawn against each other again two years later where the Lilywhites exacted revenge with a 4-0 win en route to winning the trophy for the third time.

Dundalk’s loss to Distillery in 1940 was the club’s last ever competitive game at the Athletic Grounds. While Joey Donnelly gave Dundalk the lead early in the game, Distillery came back strongly to earn a victory in the face of a poor home performance.

Here are some other interesting facts from Dundalk’s ties against non-league opposition. 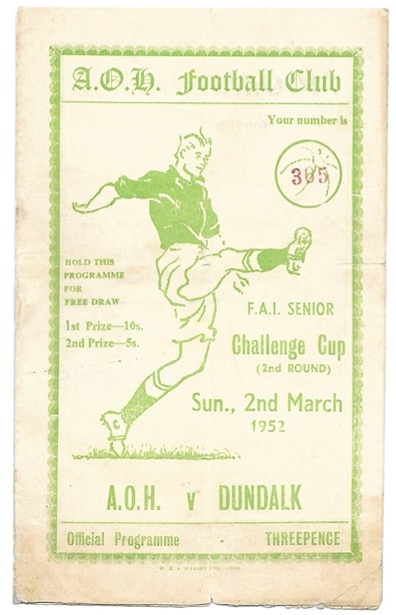 1934: Dundalk played Sligo Rovers, then a non-league team, on January 14th 1934, recording a 4-0 win. Sligo were subsequently elected to the Free State League later that year.

3: Dundalk have played Distillery in the FAI Cup on three separate occasions, 1935, 1940 and 1942. It also took Dundalk three games to finally overcome Albert Rovers of Cork in 1959. The club’s only other draw against a non-league side came against Whitehall Rangers in 1997!

5: Dundalk racked up five-goal winning margins against Glasnevin in 1930, Tramore Athletic in 1967 and Swilly Rovers in 1998.