PATS’ START IS NO SURPRISE TO HOBAN

After observing Stephen O’Donnell at close quarters for many years, St Patrick’s Athletic’s flying start to the season comes as absolutely no surprise to Dundalk striker Patrick Hoban.

O’Donnell left his position as Lilywhites opposition analyst in August 2019 to take over the reins at Richmond Park and after seeing his first year in charge interrupted by COVID-19, the former Dundalk captain has really stamped his identity on the Saints this season.

Pat’s currently sit in third place, just three points behind leaders Sligo Rovers, and Hoban, who arrived at Oriel Park with O’Donnell ahead of the 2013 campaign, said that his fellow Galwegian always had the hallmarks of being a top manager.

“I said it about St Pat’s at the start of the season,” said Hoban. “We all know about Stevie’s football intelligence and stuff like that. Everyone could tell he was going to be a manager and this year he has probably got the players that he wanted in, so it’s no surprise to me whatsoever how well they have started.”

Dundalk make the trip to Inchicore on the back of a bruising 5-1 defeat to Bohemians. Hoban watched Monday’s game from the stand but is back in contention for Friday’s fixture after recovering from a troublesome calf injury that has caused him to miss the last seven games.

“The 5-1 against Bohemians was the most embarrassing defeat I’ve had at Dundalk,” said the 29-year-old. “It was very hard to watch. Leaving Dalymount Park on the back of that result wasn’t good enough and we have to try to put it right. 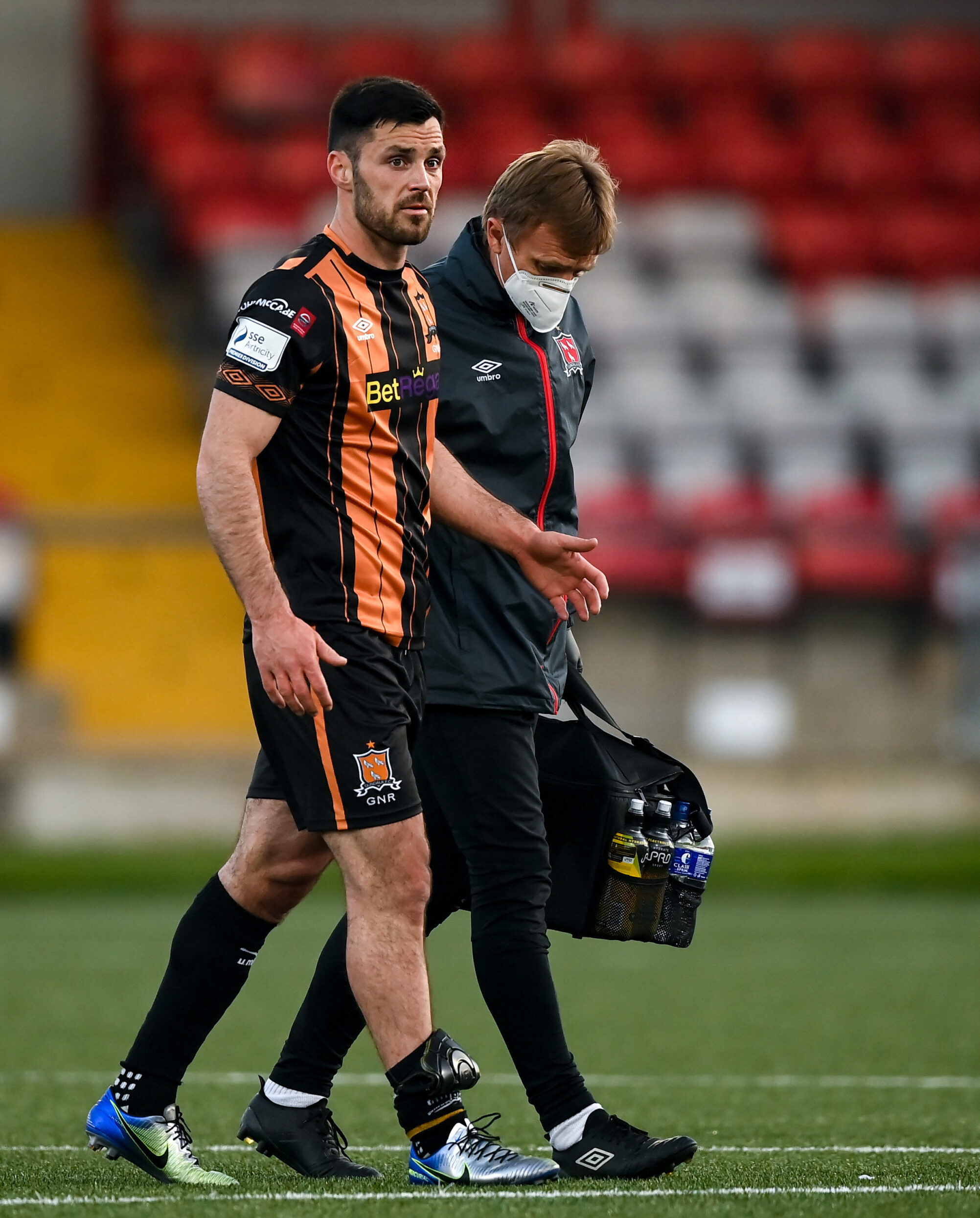 Patrick Hoban is assisted off the pitch by Dundalk physiotherapist Danny Miller during the SSE Airtricity League Premier Division match with Derry City at the Ryan McBride Brandywell in April. Photo by Stephen McCarthy/Sportsfile

“People have to understand that the days when we can just roll up and win a game of football are gone,” he added. “We need to work a lot harder, the players need to take a lot more responsibility and we need to be mentally stronger. These games are tough and the only way to correct things is by getting a result.”

O’Donnell’s men are 11 points ahead of Dundalk but the Pat’s boss said he was wary of his old teammates responding to the Dalymount demolition with a sting.

“If you had said to me that Dundalk would be mid-table after 13 games, I would have thought you were messing, but we saw what they were capable of last week when they ended Shamrock Rovers unbeaten run,” said O’Donnell.

“That’s what you judge them off, the ceiling that they can get to. When they do perform, they perform to a really high level and they are as good as, if not better than anyone in the league.

“They are a wounded animal after the Bohs game and there are lots of players there with a lot of success under their belt so we’ll be expecting a reaction from them, no doubt about that. It’ll be a very tough game.”