With two SSE Airtricity League games in the space of four days on the horizon, Vinny Perth believes Dundalk are capable of finishing the season with a flourish.

The Lilywhites make the short trip up the M1 for what should be a hotly contested 167th edition of the Louth Derby with Drogheda United at Head In The Game Park on Thursday night before playing host to relegated Longford Town on Sunday.

A win over the Drogs would see Dundalk leapfrog Tim Clancy’s side into sixth position and leave them just two points behind fourth-placed Derry City, who visit Oriel Park on the final day of the season – and Perth has set his players a challenge of picking up nine points from the nine on offer between now and the end of the campaign.

“We have to be careful and not look past what has been a very difficult fixture against Drogheda this season but I think as a team we have to finish as strongly as we can,” said Perth on Wednesday afternoon.

“Three wins in our last three games would leave us on 51 points and I think it would take a good run from everyone else to knock us out of fourth place if we did that.

“That is the goal,” he added. “If we win in Drogheda it will move us up a spot in the table and then we can look at finishing in fourth. I believe this team deserves to finish on a high.” 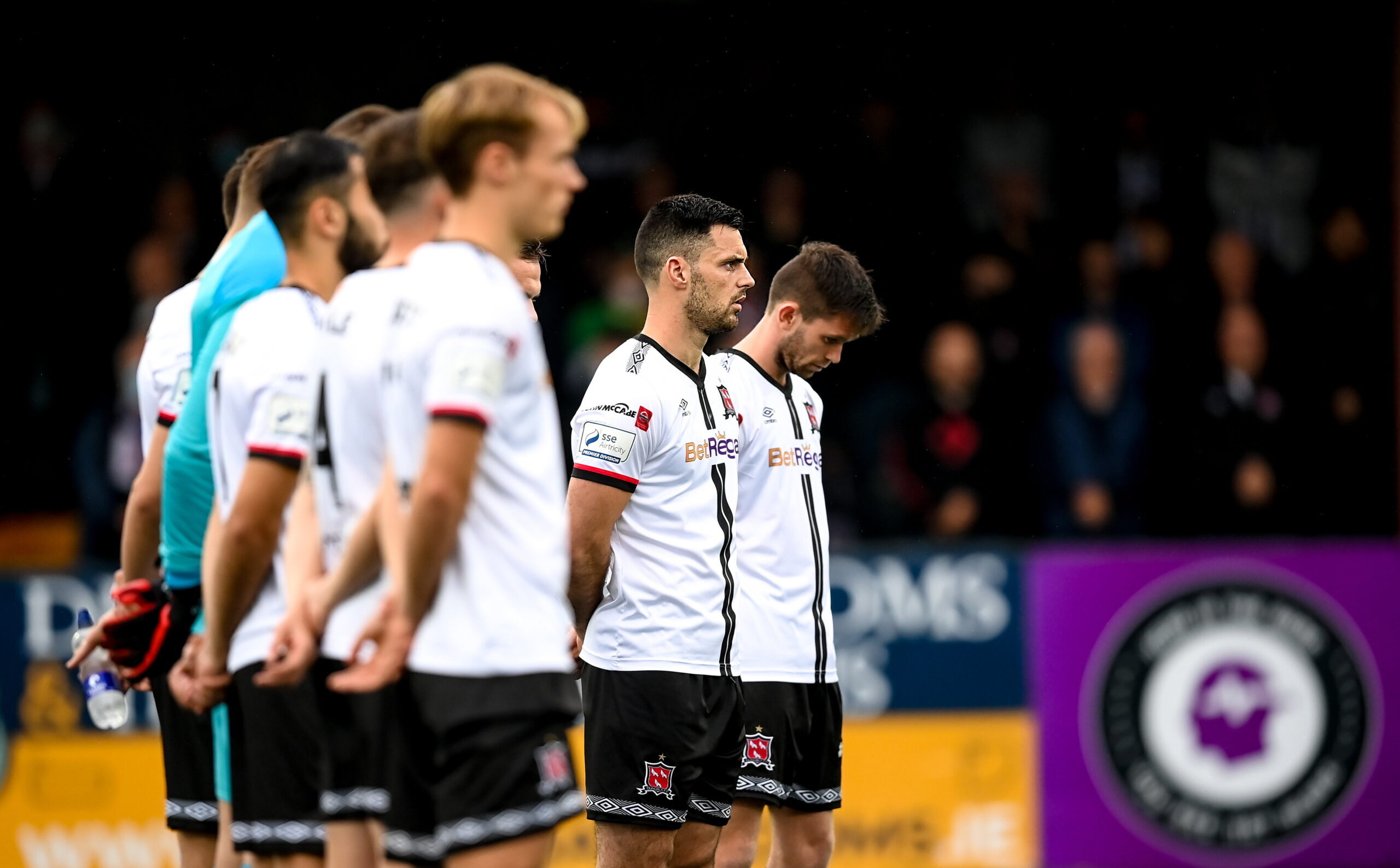 Patrick Hoban and Dundalk teammates stand for a moment’s silence before the SSE Airtricity League Premier Division match with Drogheda United at Oriel Park in August. Photo by Stephen McCarthy/Sportsfile

With just three rounds of games to play, there are just eight points separating second from bottom Finn Harps and the fourth-placed Candystripes but Perth said he wasn’t surprised by the topsy-turvy nature of the league this season.

“If you look at Shamrock Rovers, they are probably the most stable club in the league and they deserve to be champions but apart from them, there is not a lot between all of the rest of the teams so the nature of the table doesn’t surprise me.”

Dundalk will be cheered on by 600 supporters at Head In The Game Park on Thursday night and Perth said his players were determined to give them something to shout about on Boyneside.

“The derby is all about the fans,” he said. “For us, it’s a very difficult game, and we have to understand what Drogheda will do but we have tried to put some pride back in the jersey and I know our fans would love three points against the local rivals.”

Wednesday’s training session at Oriel Park finished with an entertaining shooting competition and Perth said the mood in the camp was good, contrary to what people on the outside might think.

“There is great camaraderie in the group,” he added. “On Thursday morning we did a huge amount of video analysis and some tactical work on the pitch and for the last 15 or 20 minutes, I think the local school was complaining about the laughter and noise coming off the pitch.

“That’s the blend and balance that you need, the serious stuff and hard work mixed with enjoyment. Despite everything that’s been happening, the mood around the team is as good I’ve ever seen in my eight years at the club. There’s a real togetherness about the group and they’re determined to finish on a high.” 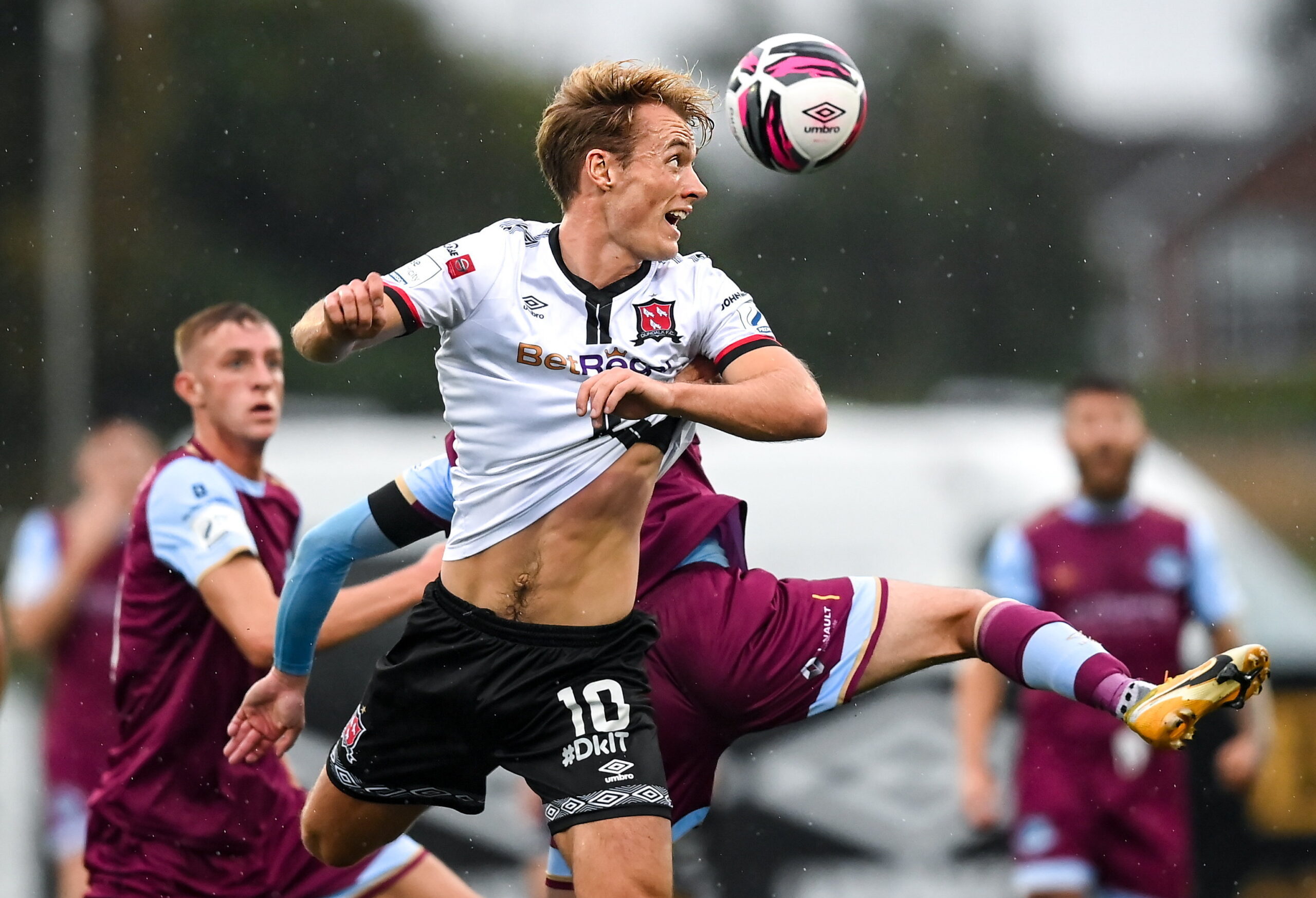 Greg Sloggett of Dundalk during the SSE Airtricity League Premier Division with Drogheda United at Oriel Park in August. Photo by Stephen McCarthy/Sportsfile

Team News
Greg Sloggett will be assessed ahead of the game after coming off in the 1-0 win over Waterford last Friday night while Sam Stanton, who missed that fixture with a strain, is also touch and go. Brian Gartland, Patrick McEleney and Wilfried Zahibo are still sidelined while Vinny Perth will also have to plan without Raivis Jurkovskis, who returned to Latvia on Wednesday following the sudden passing of his father.

Previous Meetings
This is the fourth meeting between the sides this season – and the fifth overall if you include the Jim Malone Cup which was played in pre-season.
Shane Keegan and Filippo Giovagnoli were in the dugout when Dundalk returned home with the trophy after a 3-2 win on Boyneside.
Jim Magilton was in the Lilywhites hot seat when the sides met at Oriel Park in April, a game that was settled by Han Jeongwoo’s winner, while Perth, in his second game back in charge of the club, guided Dundalk to a 1-0 win at Head In The Game Park back in June, Michael Duffy scoring the only goal of the game.
Drogheda United won the last encounter at Oriel Park in August when Mark Doyle hit a brace before Michael Duffy pulled one back for the hosts.
Incidentally, the last time Dundalk were beaten in a league game in Drogheda was on the opening night of the 2014 season when the hosts won 4-1. Peter Cherrie, Andy Boyle, Patrick Hoban and David McMillan all featured for Dundalk that night.

Ticket News
There are a limited amount of away tickets remaining for Thursday night’s SSE Airtricity League derby clash with Drogheda United at Head In The Game Park. Tickets are only available online and will not be on sale at the ground before kickoff.