Dundalk and Finn Harps played out a thrilling 3-3 draw on Friday night at Finn Park, sending the extra.ie FAI Cup to a replay at Oriel Park on Tuesday night.

Tunde Owolabi gave the Donegal side the lead after 25 minutes however a brace from Patrick Hoban was added to by Sean Murray. Harps, who had Jordan Mustoe red carded in the opening half, did manage to snatch a draw through Sean Boyd who netted twice late on.

Vinny Perth made three changes from the side which was defeated by Sligo Rovers on Tuesday night with Peter Cherrie, Daniel Cleary and Sean Murray all coming in for Alessio Abibi, Sonni Nattestad and Sami Ben Amar in Donegal.

There was little to report in the opening 20 minutes with both sides poor in possession and struggled to create any chances.

Cameron Dummigan did fire wide from distance before Finn Harps did take the lead out of the blue. 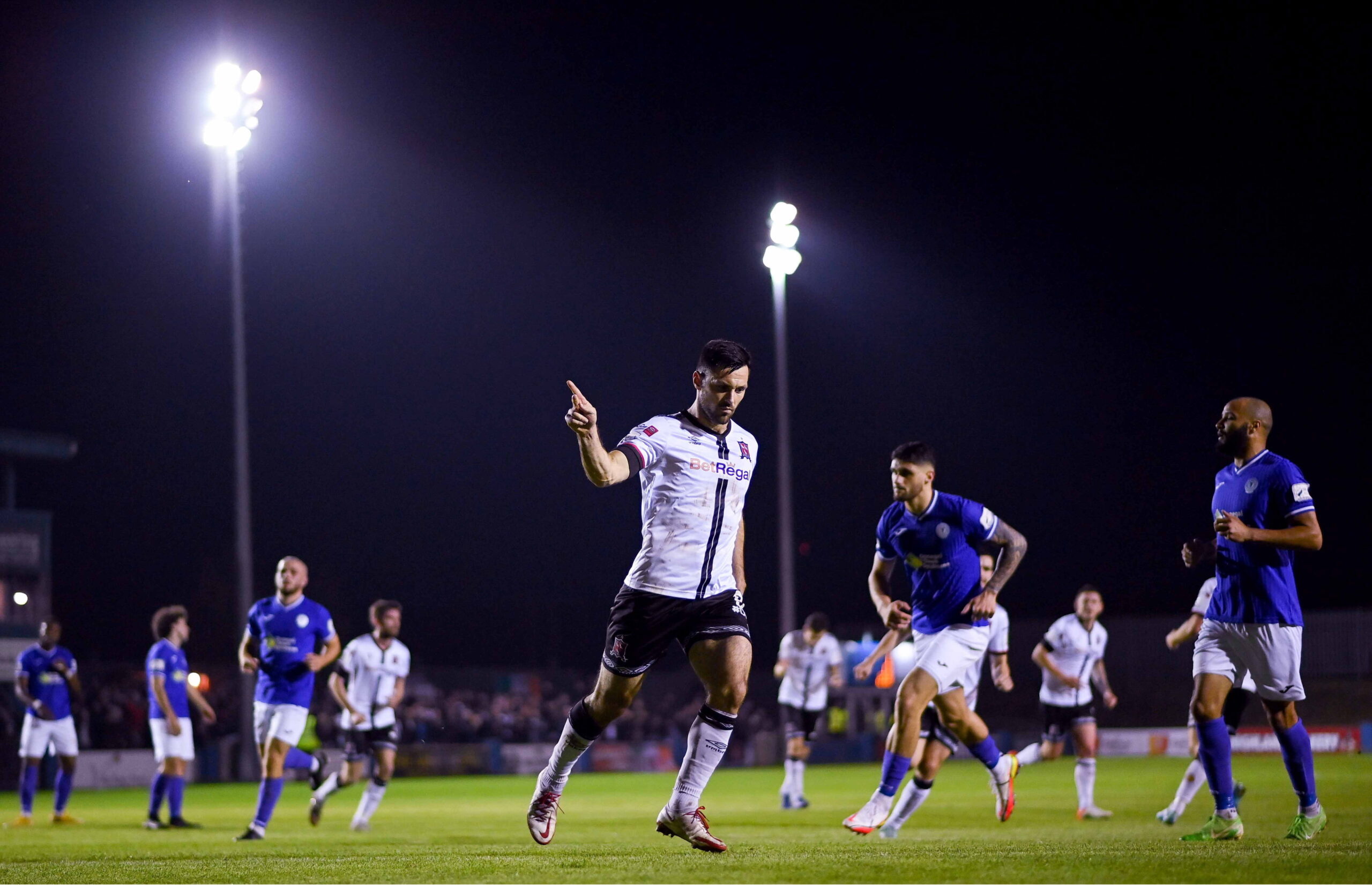 Patrick Hoban celebrates after his penalty  Photo by Ramsey Cardy/Sportsfile

Barry McNamee robbed the ball from Dummigan and gave it to Tunde Owolabi who fired brilliantly to the net across Peter Cherrie, giving him no chance.

That did spark the Lilywhites into life somewhat and they began to see more of the ball.

The visitors would get their equaliser in contentious circumstances.

Patrick Hoban’s shot was parried by Mark McGinley which fell to the on rushing Sean Murray. His follow up effort was blocked on the line by Jordan Mustoe and referee Damien MacGraith deemed that he stopped it illegally with his arm and duly pointed to the spot, as well as awarding a red card to the full back.

Hoban stepped up and fired to the bottom right corner to level proceedings.

There was a scrappiness in the match after that but Will Patching should have scored when he arrived at the back post to Michael Duffy’s clever cross but he somehow put it wide.

Perth’s men did take the lead just before the break when Murray atoned for his miss earlier on and his shot from 30 yards found the bottom corner expertly passed the dive of McGinley.

Hoban had a neat flick saved by McGinley while Sam Stanton looked like he had extended the lead when his effort goalwards was cleared on the line to preserve the 2-1 lead.

Hoban’s effort on the stroke of halt-time, which was gathered by McGinley at the second attempt, ended the half with Dundalk leading 2-1. 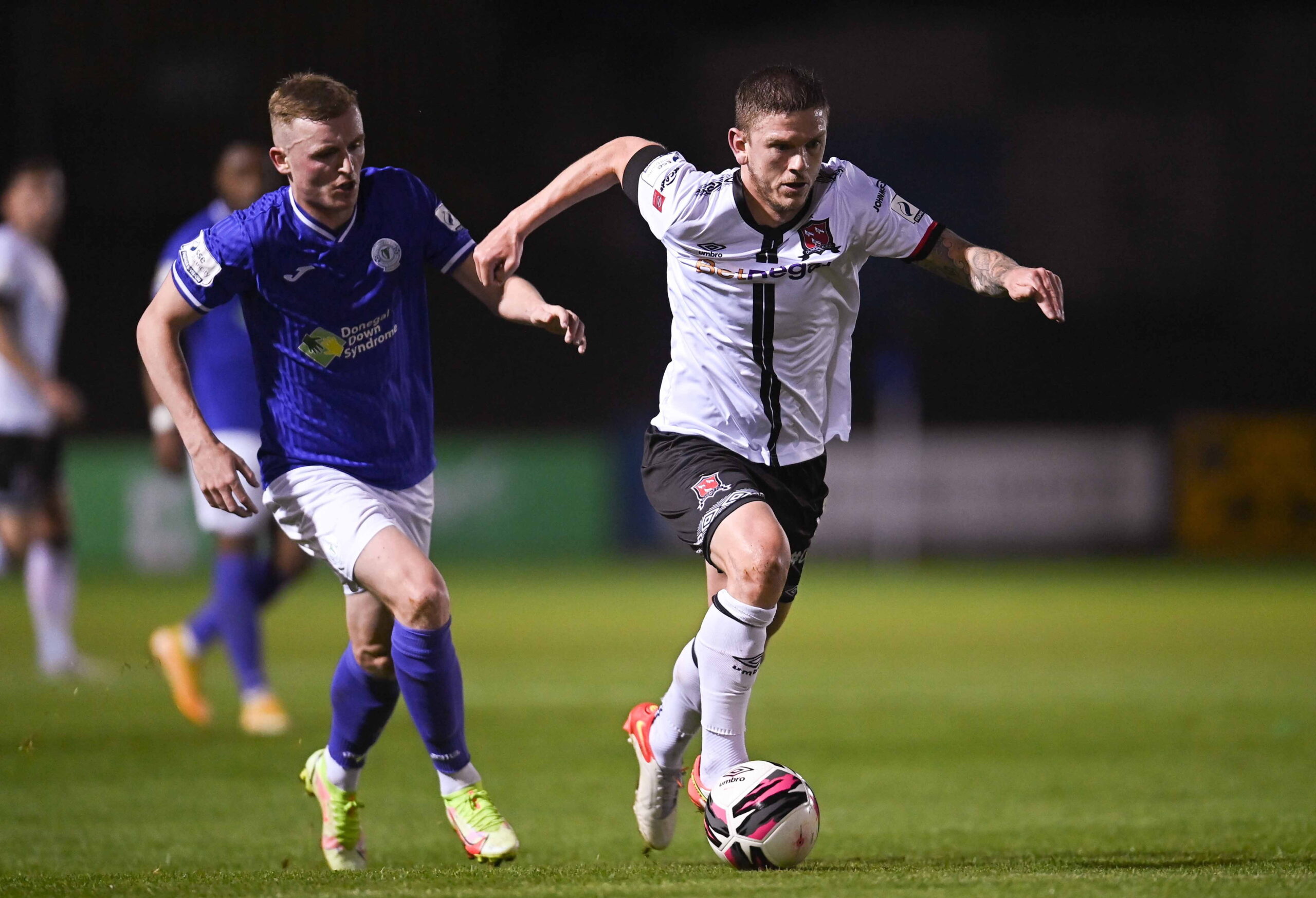 There was little to report in the opening stages of the second period with neither side creating anything of note except Ryan Rainey’s shot which was deflected into the path of Cherrie who let it go for Boyle to clear.

Murray then had his free-kick excellently saved by McGinley who finger tipped the ball over the bar to deny him before he teed up Duffy but his header was well off target.

The Lilywhites would extend their lead with 25 minutes left on the clock though.

A sumptuous ball from Murray was right onto the forehead of the number 9 and he powered the ball to the net past McGinley. 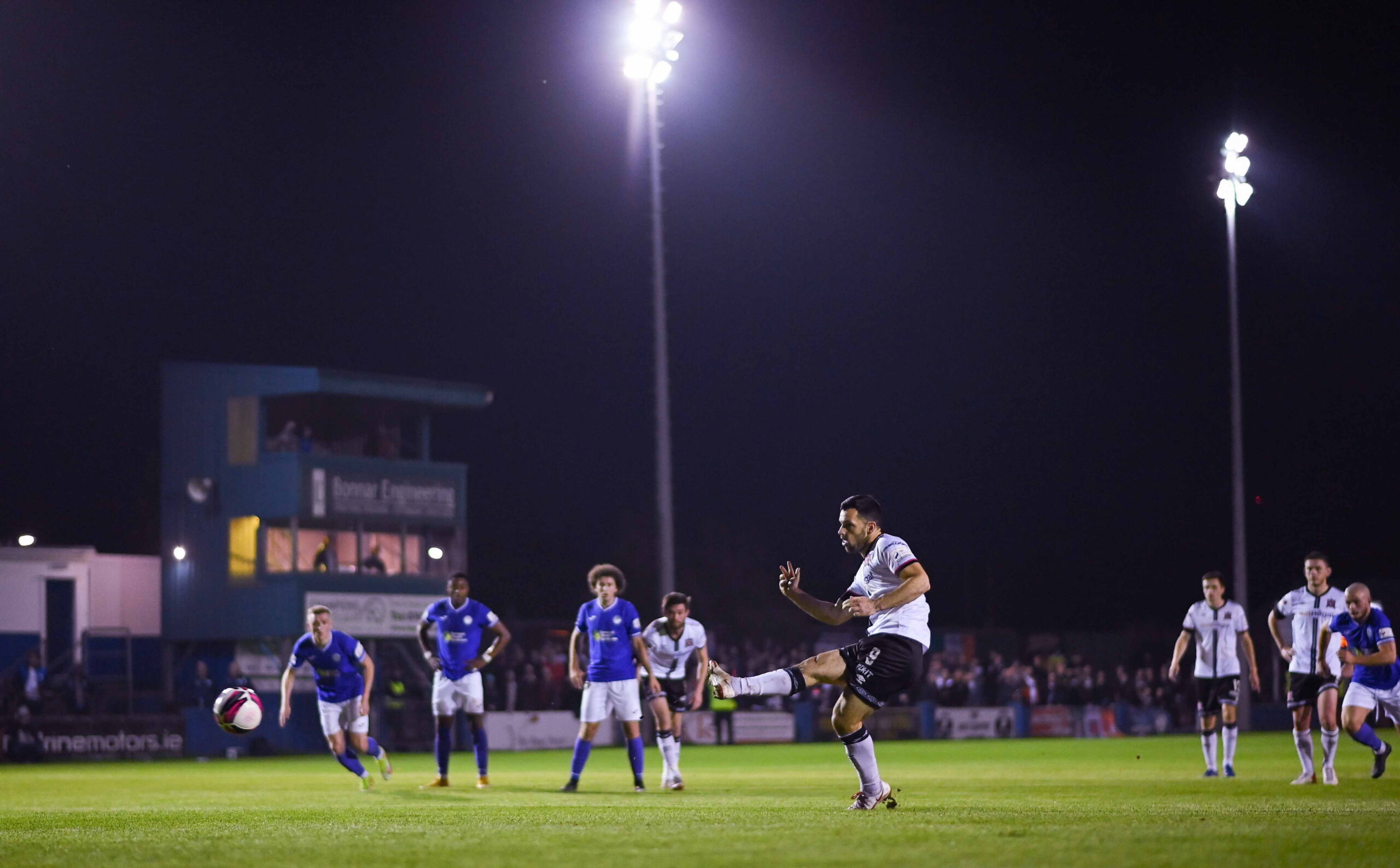 Daniel Cleary then tried to add a fourth when he shot from distance however his effort was deflected and never threatening the goal.

Cleary did come closer after that when he met Murray’s corner but his glancing header was inches over the crossbar.

Substitute Sean Boyd forced a good save from Cherrie who palmed the ball away to safety when the striker jinked inside and shot.

Harps would get their second with just over five minutes to play when Boyd got in front of Cherrie at a corner and nodded the ball to the net.

Boyd should have levelled things with the next attack when he guided an Ethan Boyle shot goalwards however Cleary produced an excellent block to deny him.

It really should have been 3-3 in the third minute of injury-time when Boyd’s knockdown found Sadiki centrally however he blazed over the bar with the goal at his mercy.

It was 3-3 with the final kick of the game though with Boyd firing to the net after a hesitancy in the defence.

That proved to be it and both sides will have to do it all again on Tuesday night.