Dundalk will be looking to end a topsy-turvy week on a high when they do battle with Finn Harps for the third time in the space of just 14 days in the SSE Airtricity League Premier Division at Finn Park on Friday night.

The sides played out a thrilling 3-3 draw in the quarter-finals of the Extra.ie FAI Cup in Ballybofey two weeks ago with Dundalk going on to win the replay 3-1 at Oriel Park four nights later.

Subsequent league wins over Sligo Rovers and Bohemians have lifted the Lilywhites out of the bottom two but Dundalk supporters were brought back down to earth on Wednesday afternoon when Derry City announced that Michael Duffy has penned a pre-contract with the Candystripes that will see him return to his native city in 2022.

After arriving from Celtic ahead of the 2017 campaign, Duffy has gone on to become one of Dundalk – and the SSE Airtricity League’s – brightest stars and speaking to dundalkfc.com on Thursday, Lilywhites head coach Perth said he had empathy for the club’s supporters, describing the winger’s impending exit as a ‘huge blow’.

“When you lose one of your friends and comrades from the past number of years, then undoubtedly there’s a feeling of disappointment within the team and the inner circle around the group.

“Personally, it’s a huge blow for me. Myself and Michael, like so many others, have achieved huge things together so it’s really difficult to take but that’s sport at the highest level. Michael has been offered an extremely good deal and he has chosen to take it. That’s football.” 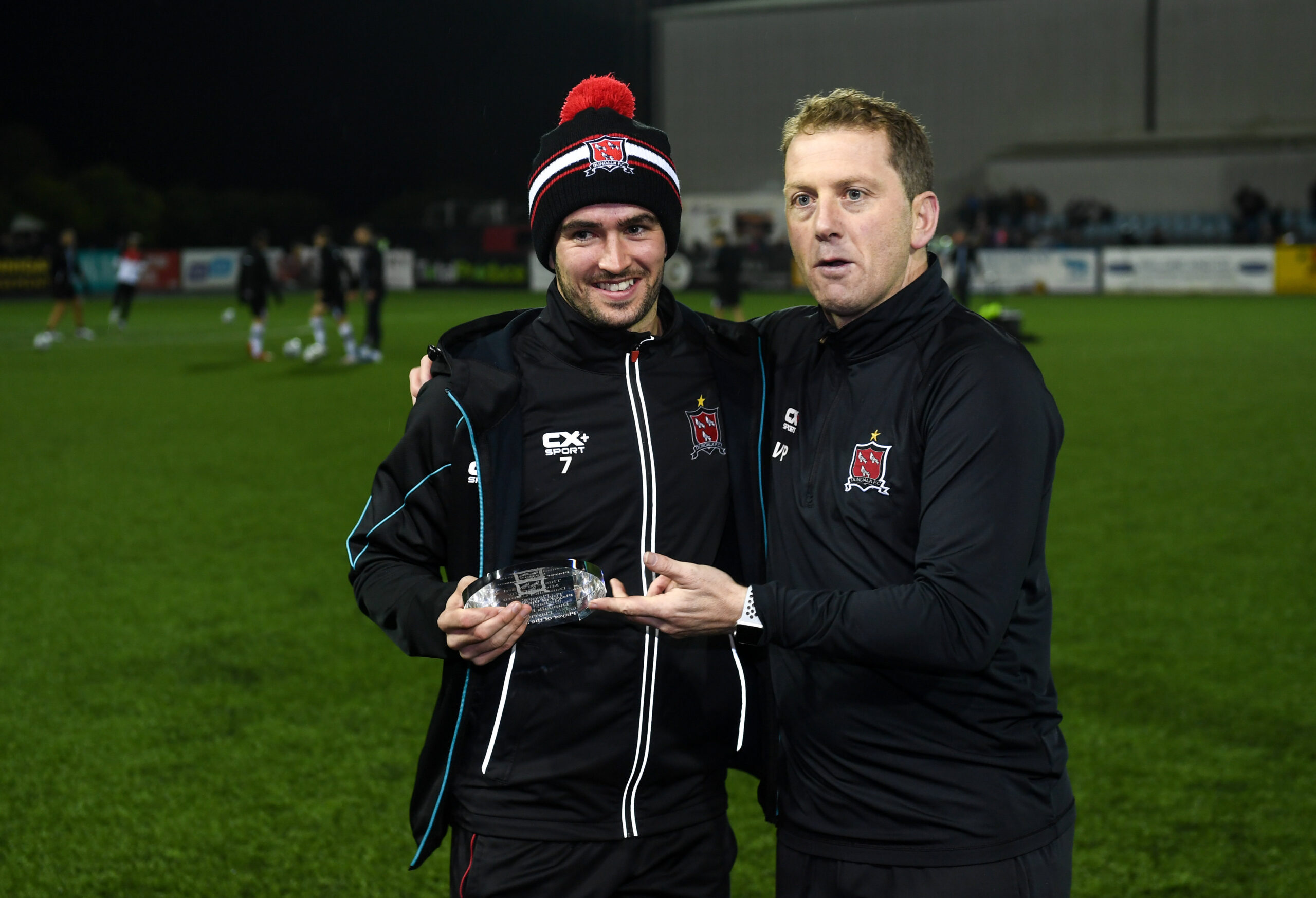 25 October 2019; Michael Duffy is presented with the 2019 Dundalk FC Players’ Player of the Year award by Vinny Perth. Photo by Stephen McCarthy/Sportsfile

Duffy has been instrumental in Dundalk’s run of wins over the past week and Perth said he had no doubts whatsoever about the winger’s commitment to ending the season on a high at Oriel Park.

“I certainly wouldn’t be worried about that with Michael,” he said. “As a group, we are really close-knit and really strong together. We have had a difficult four weeks but, hopefully, we’re coming out of it.

“We’re not quite there yet and we could be doing with winning on Friday but there is no issue with Michael. We’re all battling for each other on the training ground and on the pitch and I think you can see that with the results.”

Ollie Horgan’s men have had a full week to get ready for Friday night’s fixture but Perth said Dundalk’s lack of preparation time would be offset by his side’s familiarity with their opponents.

“It’s going to be difficult in Ballybofey. Harps haven’t played since last Friday and we’ve had a big 90 minutes in between that. They’ll certainly be fresher than us but our fitness levels have been exceptional and we just need to go again.

“It’s good that we played them twice in the past fortnight,” he continued. “As a coach, I would watch nearly every game but players generally don’t and only focus on the team they are playing against

“We’ve looked Harps in the eye twice over the past few weeks so our video work has been completely reduced which is great because we haven’t had time to overly analyse our opposition at the moment.

A win would move Dundalk one point ahead of Harps in the table with seven league games to play and Perth said it was important for his team to keep their momentum going.

“Once we get through this week, we’re down to one game a week which will allow us to put some shape and structure on the team,” he said.

“Despite the results, I think we’ve played well over the past six weeks and once we do that again, we have players in form who can score goals.”

Previous Meetings
This is the fourth, and final, league meeting between the sides this season – and the sixth overall.

In March, Adam Foley’s double cancelled out Patrick Hoban’s opener to give Harps all three points at Oriel Park while the game at Finn Park in May ended in a 1-1 draw after Ole Erik Midtskogen’s header cancelled out Barry McNamee’s opener.

David McMillan’s strike settled the corresponding league fixture at Oriel Park in July while Dundalk also won the FAI Cup quarter-final replay on their own patch just 10 days ago after the first game ended in a 3-3 draw at Finn Park.

Dundalk’s last defeat in Ballybofey came in November 2007 when Harps beat John Gill’s side, which included Vinny Perth, 2-0 in a Division One promotion play-off. Dundalk have won five of the subsequent eight fixtures at the ground, scoring 22 goals and conceding five.

Form Guide
After three wins on the bounce, a victory in the north-west would represent the first time Dundalk have won four on the trot since August 2020 when Filippo Giovagnoli’s side beat Cobh Ramblers, Shelbourne, Inter-Club d’Escaldes and Sheriff Tiraspol, the latter on penalty kicks.

The recent FAI Cup loss at Oriel Park was just the second time that Ollie Horgan’s side have tasted defeat since July and they go into Friday’s fixture full of confidence after beating Bohemians 2-1 at Dalymount Park last Friday night, Ethan Boyle and Daniel Hawkins scoring the goals. 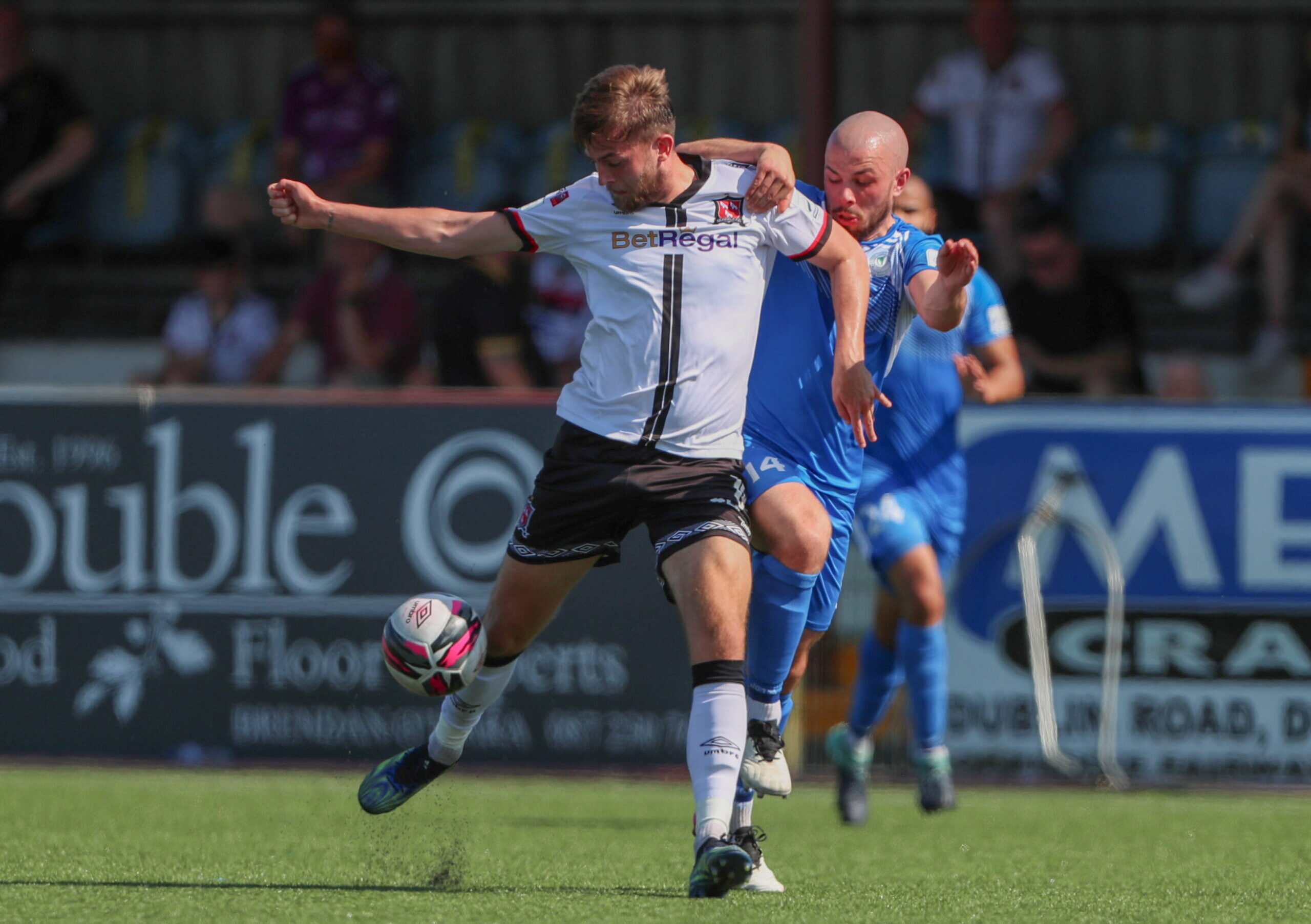 Team News
Patrick McEleney, David McMillan, David McMillan, Brian Gartland and Wilfried Zahibo all miss out with injuries while a number of players will be assessed before kickoff after a gruelling schedule.
“I’ll pick the team on the day of the game instead of Thursday, which is not ideal,” said Vinny Perth. “We’re waiting on one or two players to come back and we’re trying to be careful with players as well.
“An example of that is Raivis Jurkovskis, who would have started his ninth game in 27 days if we selected him against Bohemians. Physically, something has to give there so we need to protect people.”

Ticket News
Tickets for the fixture are now on sale at this link.