I would like to welcome the players, staff, and officials from Vitesse Arnhem to Ireland for his evening’s game. When you travel in Europe, one of the things you notice is how professional and accommodating clubs are. It shows you the standards we need to reach. I have huge respect for the way Vitesse behaved and treated us in Holland and I hope we can afford them the same level here.

Looking at the game itself, it’s going to be really difficult. Vitesse are really strong opposition and this is an extremely difficult tie for an Irish side. They are set up to attack. That is their strength and that is their way of playing – it always has been. European football teaches you and improves you as a coach because of the different systems and styles of play you encounter and the way that Vitesse attack is breathtaking at times. I don’t see them changing from that blueprint but we feel we can exploit their weaknesses. 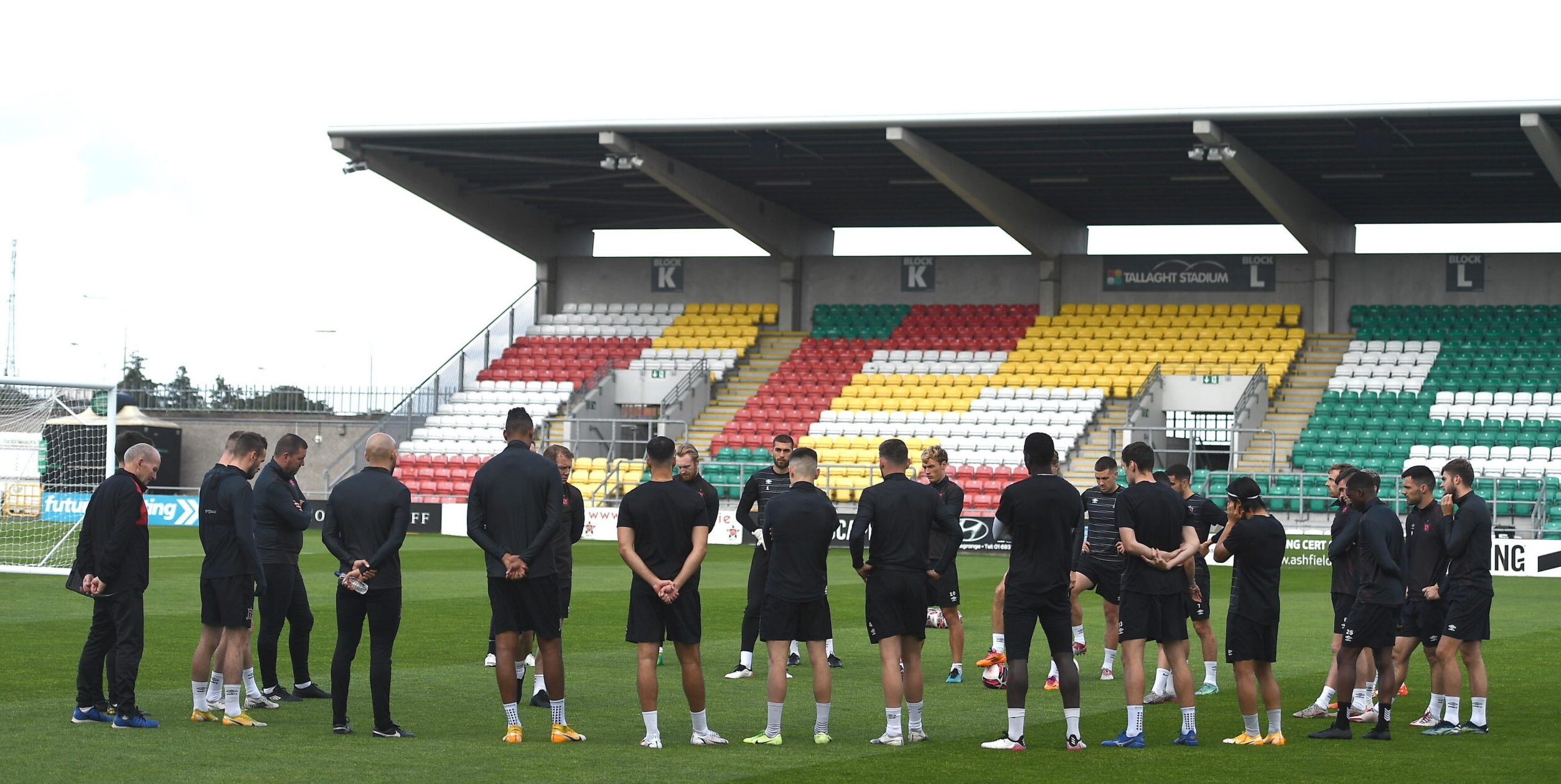 I think tonight’s game will be similar to the first leg, we will have to soak up some pressure but at other times we will have to use our quality in the final third. What our players have shown is that not only will they dig in and fight but they will also grasp the big moments. It was Patrick McEleney’s turn last week, the week before that it was Will Patching’s, the week before that it was David McMillan. The challenge now is for our players to step up to the plate again. That’s what European football affords Irish-based players. These are the nights when memories are made and it’s up to somebody to make a big moment happen.

Before the game in Holland, we spoke about levels. Are we going up another level against Vitesse? In one sense, we are, but I also believe that our players need opportunities like this to show that they can compete at this level. Raivis Jurkovskis played at the Amsterdam Arena earlier in the year and is an international for Latvia, Darragh Leahy is an Irish underage international, Sonni Nattestad scored for his country against Austria in a European Championship qualifier.

We have players in our dressing room who have played in the group stages of the Europa League twice, we have Andy Boyle, Wilfried Zahibo, players who were capped by their country. We have a hugely experienced squad and players who are fully equipped to do it at this level of the game. It’s my job to make them believe they can do it, to seize the moment, and not be overawed by any occasion they come up against.

Last week’s result extended our unbeaten run in Europe to five games while Bohemians and Shamrock Rovers have also picked up some excellent results. I think that’s down to a mixture of things. Our players are really experienced in Europe now and they know that there are going to be times when they will come across difficult moments in games against teams from higher-ranked leagues.

As well as that, I think League of Ireland players are inspired by better surroundings in Europe, at grounds like the GelreDome, for example. They always have been. For us, it’s very disappointing that we have to move the game away from Oriel Park but we have to make Tallaght Stadium, a wonderful facility provided by the South Dublin County Council, a home from home in these games.

I say this constantly but I don’t think it should solely be a club’s responsibility to improve facilities. We obviously have to make certain improvements to Oriel Park but football clubs and all sporting clubs need some assistance. We’ve seen the benefits of that in the performances of our Olympic athletes’ over the past few weeks. Kellie Harrington is from a socially deprived area and her local boxing club opened the doors for her and will do the same for many others. 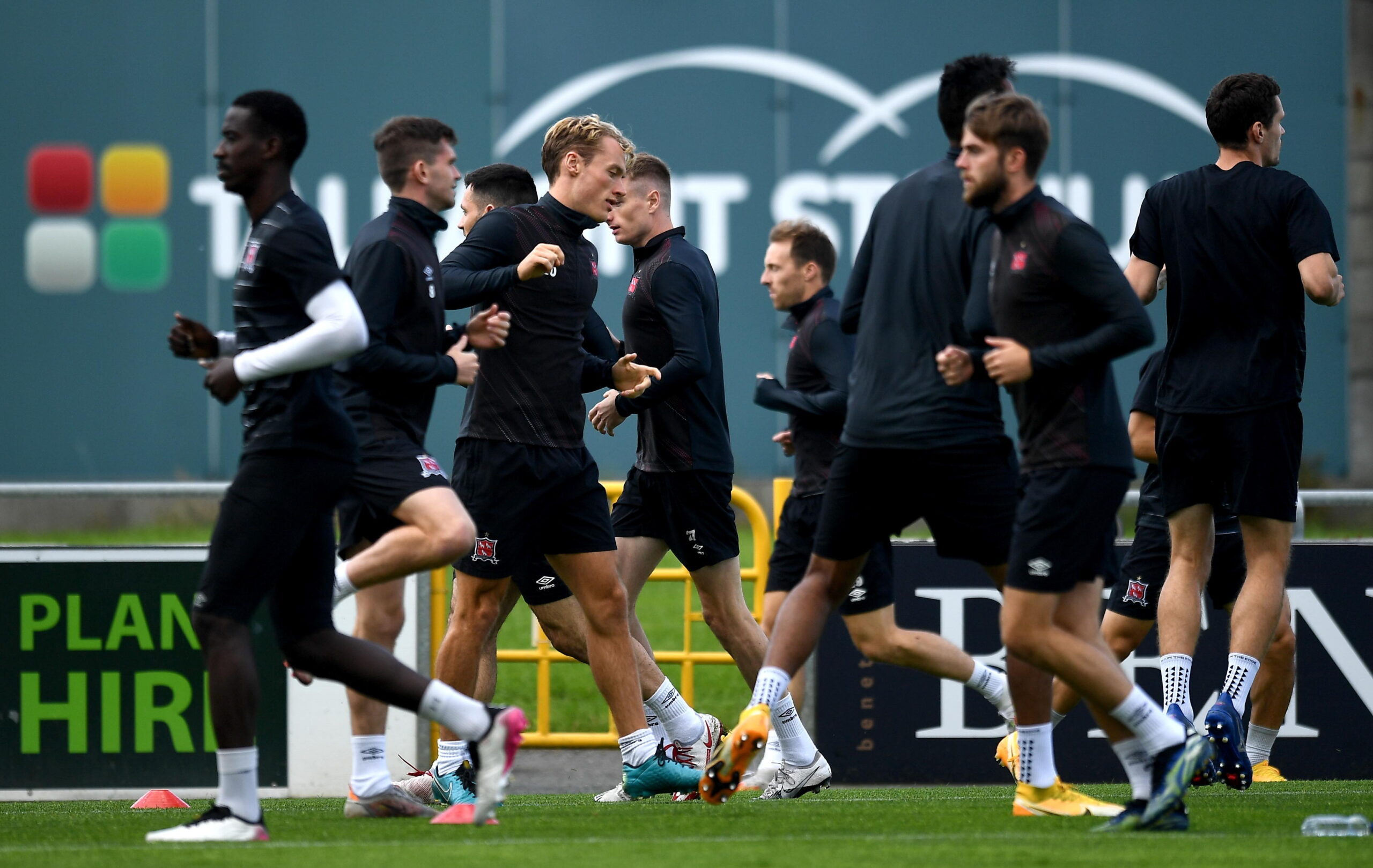 Dundalk players are put through their paces at the MD-1 training session at Tallaght Stadium. Photo by Ben McShane/Sportsfile

We’ve seen what our rowers are able to do with the right facilities behind them in Skibbereen and if you watch the Irish clubs in Europe this year, you can see that they can, at the very least, compete in the right environment. I think we can all get better but the key to it is facilities. If you have 1,000 young kids at Oriel Park, between 7pm and 10pm, once a week at least, then they’re off the streets, you know where they are, and they’re supporting the club in their local community. With that in mind, it’s important that governments and local councils back our football and sporting clubs.

Finally, I’ve heard a few comments that this European run isn’t the same as previous years but, quite frankly, that is solely down to Covid and not having people in the grounds. What we did miss in Holland last week was having 700 or 800 people getting behind us in the away end. In Estonia and Holland, we had a few supporters who managed to get in and it’s amazing how much you notice them. You look at the game in Tallinn, Will Patching ran straight to the three Dundalk fans who were in the ground when he scored!

Small things like that make a big difference. We’ve missed our fans more than other clubs and we really need you behind us tonight. The buzz around the place and the goodwill behind the team over the past two or three weeks have been immense. I’ve really enjoyed being in town for a cup of tea and I’ve seen an amazing reaction from people. There is a feel-good factor again and it’s something that we need to build on, whether we win, lose or draw this evening. We want, and we have, to keep people on our side because I believe this is a team worth fighting for.